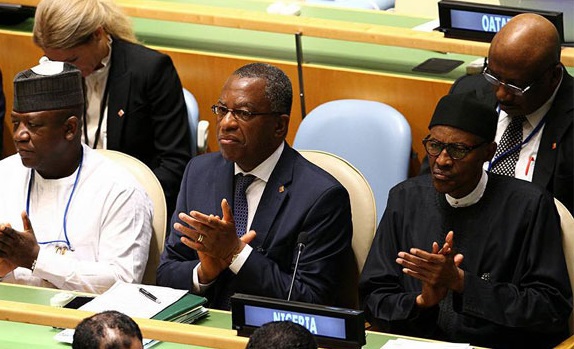 The Federal Government has hailed what it described as “the ringing global endorsement” which President Muhammadu Buhari received from world leaders during his recent trip to the United States for the 71st session of the United Nations General Assembly.

Presidents Barack Obama of the U.S and Francois Hollande of France as well as Secretary-General of the U.N, Mr. Ban Ki-moon, at separate meetings with Buhari on the sidelines of the 71st UNGA, hailed him and expressed confidence in his leadership.

The endorsements came at a time the opposition Peoples Democratic Party, PDP, called for the president’s resignation over the current economic hardships in the country.

The Federal Government, however, appealed for continuous support for the president.

The Minister of Information and Culture, Alhaji Lai Mohammed, who made this position known in a statement yesterday in Lagos, said it was delightful to hear from world leaders that Buhari’s determined and committed leadership as well as his integrity had given Nigeria a positive image in the comity of nations.

He added that the global community’s appreciation of the giant strides the administration had made in fighting terrorism and corruption, as well as in deftly managing the nation’s economy at a time of global economic downturn, indicated that it was on course in the quest to ensure a better life for the people.

“World leaders, including US President, Barrack Obama; UN Secretary-General, Ban Ki-moon; French President, Francois Hollande and Switzerland’s President, Johann Schneider-Ammann, all took turns to extol Pres. Buhari’s leadership. This should be a source of hope and pride to Nigerians who have borne the brunt of the difficulties associated with the current economic downturn”, the minister was quoted as saying in the statement signed by his Special Adviser, Mr Segun Adeyemi.

“The president sent a clear and direct message to world leaders on such issues as poverty, climate change, terrorism, plight of IDPs arising from Boko Haram activities, diversification of the economy and the creation of an enabling environment for Foreign Direct Investment in Nigeria. The timing of the president’s message and the platform in which he highlighted those issues could not have been more apt, and this will undoubtedly complement the administration’s efforts at tackling those key issues”, he added.

Mr. Mohammed expressed optimism that the country would soon begin to reap the benefits of the US-Africa Business Forum and the president’s meeting with top Nigerians professionals, which took place on the sidelines of the UN General Assembly.