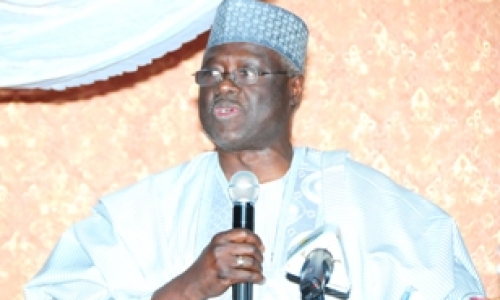 A former Chief of Defence Staff (CDS), Lieutenant General Martin-Luther Agwai, has described the death of 13 top military officers in a Nigerian Air Force plane crash on September 17, 2006 in Benue State and their subsequent burial, as the most difficult time in his entire military career.

Agwai, who said their sudden death left a huge vacuum in the army, noted that if they were to be alive today, perhaps most of the challenges facing the military in its counter insurgency operations in the Northeast would not have deteriorated to its present level.

It would be recalled that the deceased officers, comprising eight major-generals, two brigadier-generals, two wing commanders and one lieutenant colonel, were on their way to Obudu cattle ranch in Cross River State, to attend a retreat on how to transform the Nigerian Army when the NAF aircraft they were traveling in, a Dornier 228-212, crashed at Oko village in Vandekiya Local Government Area of Benue State, killing 13 of them.

The deceased officers were members of a committee set up by the federal government to reposition the army.

The 18-seater aircraft had 16 senior officers and two crew members onboard, but five people survived the crash with serious injuries.

Their death at the time shook the entire nation as it evoked a nostalgic feeling of the Ejigbo air disaster of September 26, 1992 in which top Nigerian military officers also lost their lives.

Incidentally, the Chief of Army Staff at the time, Lt.-Gen. Patrick Owoye Azazi, who narrowly missed the ill-fated flight due to its full capacity, also died in a helicopter crash on December 15, 2012.

Reliving the sad experience when he spoke at an inter-faith memorial service organized by widows of the officers in Abuja yesterday, Agwai described the death of the officers as a great blow to the Nigerian Army.

Yesterday, September 17, marked the 10th anniversary of the death of the military officers.

“I can make bold to say that if they were around, may be some of the challenges that we are facing today wouldn’t have gotten to the level that they reached”, the former CDS said.

Agwai, who was the CDS at the time, said the news of the crash came to him as a rude shock because he had a personal relationship with the deceased and hand-picked them to be members of the transformation committee.

“Their death up to their burial was one of the most trying, most difficult time I ever had in my career. And if you remember my military career, I have been involved in Sierra-Leone, Dafur, but all what I saw there did not traumatize me like what happened to these people because these were officers that I knew personally.

“Some of them I personally picked them and put them in the job because of their knowledge, professionalism and integrity. And then to wake up one day to find that that crop has disappeared is the most difficult thing”, he lamented

Agwai, who was also the chairman of the inter-faith memorial service, said their death no doubt created a gap in the military.

He said even though he got the invitation to attend the programme in less than 24, hours, he had to cancel all his other engagements to attend the occasion because of who the late officers were and their sacrifice for the country.

He also commended the widows for keeping strong and extolling the virtues of their husbands and prayed God to continue to protect them.

The survivors were Colonels A.L Dusu, N.I Angbazo and O.C Ajunwa as well as two crew members – a technician and air hostess.