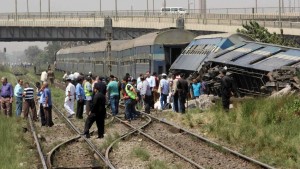 At least 22 people have been reported to have been killed in a bus collision and five died when a train derailed in separate accidents south of Cairo on Wednesday during a busy holiday travel time.

The bus collided with a truck in the southwestern province of Wedi El-Gedid, the Egyptian health ministry said.

The train, which had left Cairo for the southern city of Aswan carrying about 60 passengers, derailed south of Cairo, police and medical officials said.

The conductor hit the brakes when he spotted a problem with the tracks, causing three carriages to overturn near the village of al-Ayyat, officials said.

Fifteen passengers were also injured in the accident.

Egypt’s roads and trains are busier before national holidays, such as the Eid festival next week, with people working in Cairo and other major cities visiting their home towns and villages.