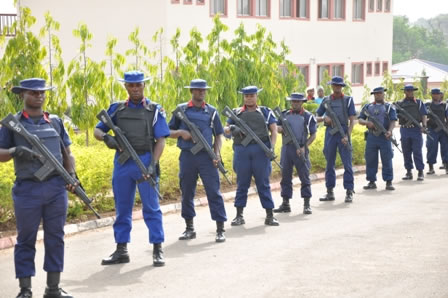 The Kwara state command of the Nigeria Security and Civil Defence Corps (NSCDC) yesterday uncovered illegal factories where adulterated engine oil is refined and packaged in Ilorin, the state capital.
The state commandant of the NSCDC, Mr. Pedro Ideba, while speaking with newsmen said 42 persons, including staff and kingpins in the refining and marketing of the illegal production and sales had been arrested.
While explaining how his men got to know about the activities in the factories, Mr Ideba, said his officials had been on surveillance of a particular factory in the past three months, adding that the fence of the factory was as high as that of a prison yard, with illegal production done only at night and distribution early in the morning.
He said his men who had laid ambush pounced on two trucks while they were entering the factory to load the illegal products on Wednesday.
He also said that the owner of the factory, Olusegun Jesuwumi, had engaged in the illegal engine oil refinery for a long time, added that the level of economic disadvantage of the illegal production was unquantifiable.
Speaking with journalists, Olusegun Jesuwumi, a secondary school certificate holder, said that he was aware of his illegal action, adding that he was trying to meet the requirements of registering under DPR and SON.
Meanwhile, the teams led by the Directorate of State Security Service and the Directorate of Petroleum Products (DPR) and the NSCDC have sealed the illegal factories.
Advertisement