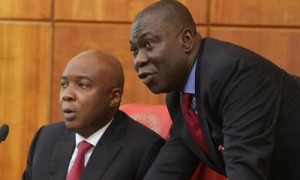 The case the Senate President of Nigeria, Bukola Saraki, and his Deputy, Ike Ekweremadu, and two others, over alleged forgery has been adjourned until October 7, reports claim.
The trial was to be held on September 28, at a High Court of the Federal Capital Territory in Abuja, but due to information of the Attorney-General of the Federation and Minister of Justice, Abubakar Malami (SAN) not releasing the case file to the newly appointed prosecution counsel led by Aliyu Umar (SAN), the trial had to be adjourned.
The accused were present for the court hearing but however left when it became clear that the trial would not go ahead.
Umar informed Justice Yusuf Halilu that he was not ready to proceed with the trial because the detailed case file in the office of the AGF containing motions by Saraki and others asking the court not to entertain the case had not been released to him.
SEE ALSO: My Political Travails Will Soon Fizzle Out – Saraki