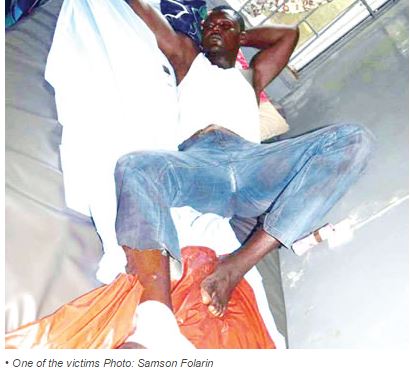 There was confusion at Sycamore Junction, Ajara Topa area of Badagry, Lagos State, after some customs officers allegedly opened fire on some residents.

It was learnt that the officers, who were attached to the Federal Operations Unit, were chasing a smuggler who had fled into the community.

Among the four people hit by stray bullets were a motorcycle rider, Alayoade Arewayo and one John Sonayo.

While Arewayo survived and was rushed to a private hospital in Badagry, Sonayo was said to have died in transit from the Badagry General Hospital to the Lagos State University Teaching Hospital, Ikeja.

The other two, whose names could not be ascertained as of press time, were reportedly taken to a hospital in Cotonou, Benin Republic.

They were said to have got reinforcement from a military barracks in the area to forestall a mob attack.

Arewayo, who sustained a gunshot injury in the leg, said he was returning from a church programme around 7.30pm on Saturday when he was hit by a stray bullet.

He said, “I had a crusade programme at Marina, Ebute area on that day. I had left the place for home when it started raining. I decided to call at a shop to buy noodles that I would take in the night.

“I had hardly dropped off my motorcycle when I started hearing sporadic gunshots; people were running helter-skelter. I thought it was armed robbery. The people I wanted to buy noodles from had also taken to their heels.

“As I fled for dear life, I was hit by a bullet in the leg. I fell and was assisted to a hospital by my friend that was with me. It was later I was told that four people were shot and one person later died.”

It was learnt that the customs officers neither went to the community in their operational vehicle nor wore their uniforms.

They were reportedly led by one DSC Jude.

A resident of the community, Mr. David Taiwo, said he reported the incident at the Badagry Police Division around 8.30pm, adding that the Divisional Police Officer assigned a policeman to visit the scene of the shooting.

He said, “We discovered that the customs officers were from the Federal Operations Unit in Ikeja; they were posted to Badagry. They were not in their operational vehicle and they didn’t wear their uniform. They came in a private car. They pursued a smuggler, who loaded about eight bags of rice.

“To effect arrest, they started shooting sporadically. Four innocent people were hit by bullets. One of them, John Sonayo, was taken to the Badagry General Hospital, but he was referred to LASUTH. It was on the way that he died. The family members of the other victims took them to Cotonou for treatments. The victims were not smugglers.”

Taiwo said the customs officers ran to Ibereko Baracks to get reinforcement against members of the community that had gathered to attack them.

A community leader said no fewer than 10 residents had been allegedly killed in 2016 by operatives of the Nigeria Customs Service, adding that the officers usually harassed residents.

“Sometimes, they move from house to house with the help of soldiers. They ransack houses and shops. People in Badagry now live in fear,” he added.

The Police Public Relations Officer, SP Dolapo Badmos, confirmed that there was a shooting incident in the area, adding that the police had written the customs authorities for details.

She said, “We have written to the customs authorities to furnish us with relevant facts that will aid our investigations into the matter.”

The spokesperson for the NCS, Mr. Jerry Attah, said he had yet to be briefed on the incident, adding that he would get back to our correspondent as soon as he was able to get across to the leader of the team.

“But as a command, we don’t condone indiscipline and we don’t encourage our officers to shoot at harmless civilians. We will investigate the case,” he said.

However, an official told PUNCH Metro that those shot were smugglers, adding that the customs service recovered two cars filled with smuggled rice.

He said, “What happened that day was that some customs officers, attached to Iyafi checkpoint, apprehended two unregistered Passat Station Wagon loaded with smuggled rice along Sycamore Hotel Road. One of the vehicles was attacked by the smugglers en route to the customs office.

“Some of the customs officers fired several shots to secure their safety, thereby injuring two persons, while the two cars were forcefully released by the smugglers. One of the injured persons was taken to the general hospital where he later died. The other person is responding to treatment in a hospital in Badagry.”