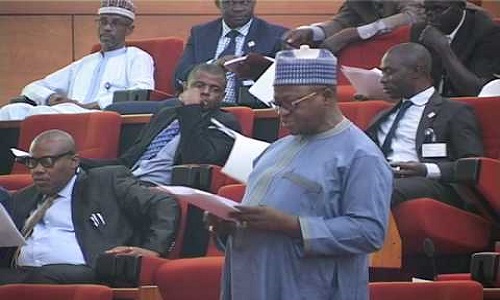 A chieftain of the Peoples Democratic Party (PDP) in Plateau State, Chief Alexander Mwolwus, has described the defection of Senator Joshua Dariye from the PDP to the All Progressives Congress (APC) as a “sham” and an attempt to escape prosecution by anti-graft agencies.

Dariye, a former Plateau governor, had last Thursday announced his defection to APC in a letter read by Senate President Bukola Saraki on the floor of the Senate.

The senator representing Plateau Central had in the letter, hinged his decision to defect to tge governing APC on the “protracted division at the national level of the PDP”.

He is currently standing trial on a 23-count charge bordering on alleged money laundering and diversion of N1.2billion ecological funds while he was governor of Plateau State between 1999 and 2006.

However, Mwolwus, a former Special Adviser to former Governor Jonah Jang on Political Affairs, in a chat with journalists in Jos, the state capital yesterday, described Dariye’s excuse as “flimsy and out of tune with realities”.

According to Mwolwus, who had lost the PDP primaries for the Plateau Central senatorial seat to Dariye, “he is only looking for a soft landing and escape from the anti-graft agencies, which are investigating and prosecuting him.

“The public is aware that Dariye, who is our former Governor under the platform of PDP, is facing trial for some of his activities while as Governor of Plateau from 1999-2007.

“But the unfortunate thing is that, this action cannot save him; APC will not, by his decamp, forgive him all the rot, because they claimed to be fighting corruption.‎

“I am sad and worried for him (Dariye) especially his political career; I could sense that he is descending politically by that wrong action he took”.‎

The PDP chieftain further described the ex-governor’s action as very shocking and surprising to the people of his constituency, Plateau Central Zone and the entire people of Plateau.

According to him, Plateau Central Zone, which Dariye represents, had been the most formidable force in the politics of Plateau, “but he has disappointed it”.

“Nobody that had ruled Plateau would behave the way Dariye had done; jumping from ACN to LP to PDP and now to APC, which I am sure, will definitely think twice about him.‎

“You must have a genuine reason to leave a party; as for us in PDP here on the Plateau we are a family without any problem within and among us”, Mwolwus assured