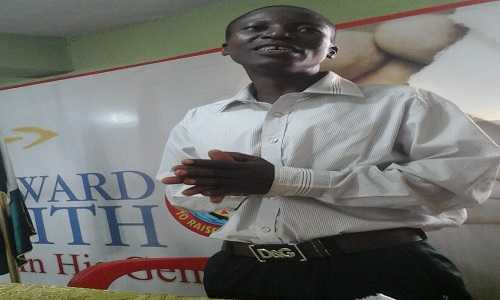 A Pastor, Prince Adewale Fagbire, who was widely reported to have invaded his community shrine at Ketu-Ayetoro, Yewa North Local Government Area of Ogun State to pull it down but was struck dumb and motionless, has given his own account of what happened.

He said though the town’s traditionalists hit him with “charms and other fetish objects”, he was not “harmed” at all.

Fagbire, who is a Pastor at the Christ Apostolic Church (CAC) in Ayetoro area, said he actually entered the shrine, evacuated all the fetish items that were kept there and also took a position beside the entrance where he stood in silence, as instructed by God.

Prince Fagbire, who is the son of the past Alaye of Ayetoro, Oba Taiwo Fagbire, said his late father and monarch, used to take him to the said shrine occasionally when he was alive.

Giving his own version of events while addressing a handful of reporters at the Office of the Chairman, Ogun State chapter of the Christian Association of Nigeria (CAN), Bishop Tunde Akin-Akinsanya in Abeokuta, the state capital, Fagbire said he elected to “remain calm and mute” during the assault and interrogation at the shrine by the traditionalists and some villagers.

Speaking in the presence of over a dozen of Christian leaders from CAN and Pentecostal Fellowship of Nigeria (PFN) in Ogun State, the pastor said God instructed him to stay calm and not utter a word at the shrine.

He debunked reports that his silence on the site of the shrine had anything to with his being beaten with “charms and fetish objects” by the traditionalists.

The father of two claimed that the action of the traditionalists had no physical or spiritual effects on him.

According to him, it was also not true as reported in some section of the media that the priests and custodians of the shrine upon the intervention of the Alaye of Ayetoro, Oba Abdulaziz Adelakun, treated or healed him before he could regain his consciousness.

“I was conscious, physically and mentally sound, during and after the incident because God was already with me. I followed the instruction of the LORD to enter the shrine and packed all the items there away. I followed God’s instruction to be quiet as instructed by God.

“God told me to go there (the shrine), create a scene, step aside and watch the film (the unfolding events). They struck me with charms and nothing happened to me. They know the truth, nobody treated me and I spoke when I got to the Palace of the Oba”, he said.