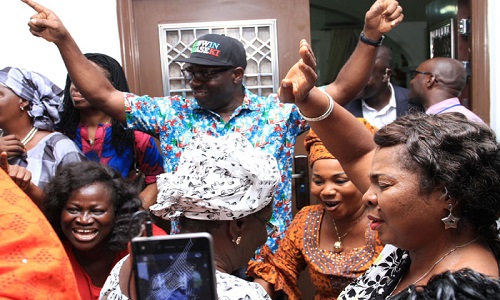 As congratulatory messages continue to pour in for the All Progressives Congress, APC, and its candidate in the just-concluded governorship election in Edo State, Godwin Obaseki, voters in the state have been hailed for rejecting the Peoples Democratic Party, PDP.

The Independent National Electoral Commission, INEC, on Thursday declared Mr. Obaseki winner of the keenly contested polls with 319,483 votes to defeat his closest rival, Mr. Osagie Ize-Iyamu of the PDP, who got 253,173 votes.

Reacting to the outcome of the polls, the APC in Ondo State congratulated Obaseki, the Governor-elect of Edo State, describing his victory as well-deserved.

Ahead of the November 26th governorship election in the state, the Ondo APC advised INEC not to lose sleep on its new strategy of simultaneous Accreditation and Voting, which it noted, largely reduced incidences of rigging and violence in the just concluded Edo polls.

Governor of Osun State Ogbeni Rauf Aregbesola, last night congratulated the APC on the outcome of the Edo governorship election.

In a goodwill message to Governor-elect Obaseki and the APC, Aregbesola said the final result of the election was not surprising given Nigerians’ conviction that the APC had offered quality and selfless leadership where it is in control.

“Victory was not unexpected for the only party that has proved beyond doubt that selfless service to the people is weapon to kill and bury political parties that promote selfishness, greed, self-aggrandizement and elevates kleptocracy as a state policy.

“As bad as the PDP brought Nigeria, it is evident the rescue mission is on course no matter what the naysayers say”, the Osun governor said.

In the same vein, APC stalwart, Asiwaju Bola Tinubu, yesterday, hailed the people of Edo State for making the right choice to govern them for the next four years.

In a congratulatory message, the former Lagos State Governor described Governor-elect Obaseki as “a tested technocrat who is competent and experienced to take over and continue the good work done by the outgoing governor of the state, Comrade Adams Oshiomhole”.

The APC leader’s statement released by his Media Office, also congratulated Oshiomhole for his achievements in Edo State, which he pointed out, helped in retaining the state for the APC.

Also, the National Chairman of APC, Chief John Odigie-Oyegun, congratulated the party’s candidate and running mate on their election victory.

The APC National Chairman said: “The people of Edo state voted to ensure continuity and consolidation of the massive multi-faceted developments recorded under the administration of Governor Adams Oshiomhole”.

In a statement last night in Abuja, Oyegun also urged the opposition Peoples Democratic Party (PDP) to accept the verdict of the Edo people in good faith.