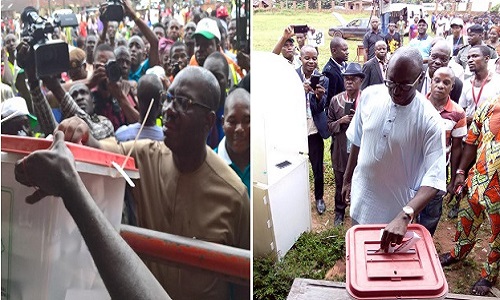 The Edo State governorship election held on Wednesday across the 18 local government areas of the state with some of the big names failing to deliver their polling units.

The two leading candidates – Godwin Obaseki of the All Progressives Congress and Pastor Osagie Ize-Iyamu of the Peoples Democratic Party – lived up to expectations as they won in their units.

The APC candidate, who voted at Unit 19, Ward four in Oredo local government, secured 160 votes against 77 votes for the PDP.

Ize-Iyamu won in his unit (Unit 26 Ward 5 in Orhionmwon local government area) by 369 votes to APC’s one.

The biggest flop, however, was the APC National Chairman, Chief John Odigie-Oyegun, who was could not deliver his unit to his party.

At the PU001 Staff Training School, Benin where Oyegun and Ize-Iyamu’s wife, Idia, voted, the PDP won the unit with 78 votes to APC’s 69.

Mr. Oyegun had the last laugh with the APC winning in his local government, Oredo.

Governor Adams Oshiomhole also won in his polling unit but former Governor Oserhiemen Osunbor, lost his unit to the PDP.

Also showing his strength in the politics of Edo State was former chairman of the Board of Trustees (BoT) of the PDP, Chief Tony Anenih, who delivered his local government – Esan Northeast – to the PDP.

Also showing some strength was APC governorship aspirant, Gen. Charles Airhiavbere (retd.), who delivered for his party at Unit 18, 19, 20 and 21 of Ward one in Oredo local government.

PDP Senator, Matthew Urhoghide, voted in Unit nine Ward two where the PDP scored 139 and the APC got 51 votes.