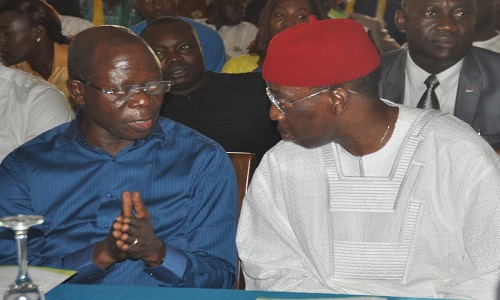 Governor Ifeanyi Okowa of Delta State has described as alarmist, the allegation credited to the Governor of Edo State, Comrade Adams Oshiomhole, that him (Okowa) and Governor Nyesom Wike of Rivers State mobilized 8,000 militants to the state.

Mr. Adams made the allegation when he received the Inspector General of Police, Idris Ibrahim, in his office last Friday.

According to him, Messrs. Wike and Okowa mobilized the militants, not solely for the purpose of swelling votes for their party – the Peoples Democratic Party and its candidate, Pastor Osagie Ize-Iyamu – but to unleash violence on voters during the September 28 governorship election in Edo State.

In his reaction, Gov. Okowa, said Oshiomhole’s allegation is not only reckless but also childish and unfounded as he does not own or sponsor militants or thugs.

Speaking through the Delta State Commissioner for Information, Mr. Patrick Ukah, the governor also denied the claim by his Edo counterpart that he sponsored the governorship campaign of the PDP candidate to the tune of N2billion.

He said: “We reject this accusation as alarmist in conception, reckless in delivery, puerile in content and false in facts, and so fit only for kindergarten’s tales by moonlight”.

The governor  recalled a similar development in 2012, “when Oshiomhole surprised the whole nation by raising an alarm on election day against the umpire, the Independent National Electoral Commission (INEC) that it was about to rig the election in favour of the opposition”, adding: “It turned out to be hoax as he won his re-election bid. He was to later childishly explain his gaffe as just being proactive.

“Ordinarily, we are weary of joining issues with, not just a next door neighbor governor, but also of a state which together with Delta, has shared such a long and enviable social, political and economic history from the old days Mid-West Region to that of the now defunct Bendel State. Oshiomhole is known for making wide, unsubstantiated and curious allegations and this is something of a trademark peculiar to him. If a man is gifted with the power of oratory, he must be careful to avoid a descent into suffering from diarrhoea of the mouth”.

On the allegation that he, alongside Wike, donated the whopping sum of N2billion to the PDP candidate in Edo, Gov. Okowa described it as a product of Mr. Oshiomhole’s wild imagination.

“It beats one hollow that Oshiomhole would, in his wild imagination, come up with such a curious allegation that a state in this country will just dole out one billion Naira in cash and to imagine the other logistics of embarking on ‘exporting militants’ to another state.

“Much as Governor Okowa, as a faithful party member, will support the candidate of the Peoples Democratic Party (PDP), he certainly has better things to channel One Billion Naira into. And just for the record, Governor Okowa does not owe salaries. We wish to warn that the good people of Edo and Delta have come a very long way. Oshiomhole should not in the name of politics sow a seed of discord, suspicion and bitterness in their minds before leaving office.

“He now has 18 more days to work for his candidate and party, we advise he faces it squarely and stop this impolitic of mudslinging and campaign of calumny”.