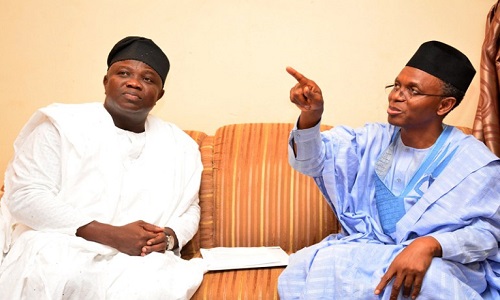 The Peoples Democratic Party, PDP, candidate in the ongoing governorship election in Edo State, Pastor Osagie Ize-Iyamu, has questioned the motive behind the presence of the governors of Kaduna and Lagos States, Nasir El-Rufa’I and Akinwunmi Ambode respectively, in the state.

Ize-Iyamu said the presence of the two All Progressives Congress governors in the state was worrisome in view of the fact that there was a restriction of movement of persons within the state.

He made the allegation after casting his vote at Ward 5, Unit 26, Iguododo Primary School, Iguododo, Orhiomwon ‎local government area.

The PDP candidate, who described the election so far as “very peaceful”, urged the Independent National Electoral Commission, INEC, and security agencies, to ensure that the APC does not hijack the process.

“I want to cry out to the whole world that I have been reliably informed that Governors Akinwunmi Ambode of Lagos and Nasir El-Rufai of Kaduna, are in the state. If the federal government and INEC declared today ‎a restricted date for movement, even to indigenes of the state, what are they doing here on our election day?” Ize-Iyamu queried.

“We think that their reasons cannot be genuine. We have gone through the period of campaigning and we expect Edo people will be left alone to vote.

“They should be advised to go back to their states immediately, for their own interest”, he added.

He also said that the PDP had written to the Inspector General of Police on several alleged arrest and harassment of the party’s supporters, and had received assurances that the police in the state would be called to order.

“You know they have been using the security agencies to harass our people even till last night trying to arrest them, detain them in any flimsy excuses”, Mr. Ize-Iyamu said.

“But we have spoken to their superiors who have assured us that those who are doing so are doing it on their own and they would call them to order. For now we are satisfied with that assurance”.

But Governor Adams Oshiomhole has debunked the claim by Ize-Iyamu that Governors El-Rufai and Ambode were in Edo state.

He made this known while briefing newsmen shortly after he cast his vote at his polling unit.

Refuting the claim, Oshiomhole said that Ambode and El-Rufai were presently in United Kingdom and Kaduna respectively and not in the state as claimed by the PDP candidate.