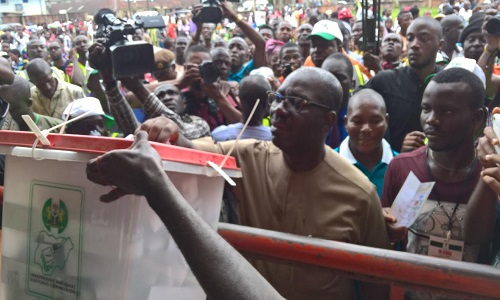 After going on a short recess, the Independent National Electoral Commission, INEC, has resumed official collation and announcement of results of the Edo governorship election.

Earlier, supporters of the Peoples Democratic Party, PDP, had stormed the collation center at Ikpoba Hill, Benin City, to express their grievances with the results so far announced by INEC. They called for a cancellation of the results, alleging manipulation by the State Governor, Adams Oshiomhole.

This is just as a KOWA party agent at the INEC venue where results are being announced, called for the total cancellation of the election, describing it as a sham.

The results as announced after the break are as follows: