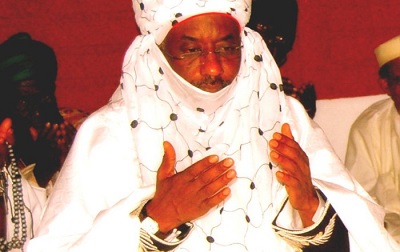 The Emir of Kano, Alhaji Muhammad Sanusi II, on Monday called on the local, state and federal governments to focus on agriculture so as to boost food production in the country.

Alh Sanusi who made this call while delivering his traditional Eid-el-Kabir message shortly after the Eid prayer at the Kofar Mata Eid praying ground in Kano metropolis said there is also the need for the Federal Government to construct additional dams across the country to enhance dry season farming for massive production of cash and food crops.

He said constructing more dams was necessary in view of the fact that most of the developed countries had for long stopped depending on wet season farming.

The monarch added that boosting agriculture in the country would provide job opportunities to the teeming number of unemployed youths as well as ensure food security in the country.

Emir Sanusi also appealed to the wealthy and influential Muslims to support the less privileged persons in the society in order to alleviate their sufferings, especially during the current economic recession in the country.