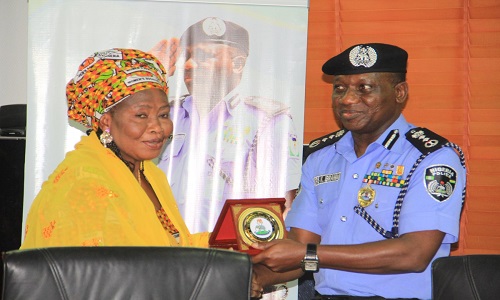 “Enough is enough”, newly-confirmed Inspector-General of Police, Ibrahim Idris, has told organizers of the BringBackOurGirls (BBOG) movement in Abuja, led by a former Minister of Education, Oby Ezekwesili.

The BBOG have been attempting to take their protest for the rescue of the abducted Chibok schoolgirls inside the Presidential Villa, Abuja, but the police have prevented them.

The group, which vowed to lead a march to the Presidential Villa every 72 hours, has however, incurred the wrath of the police chief, who said their actions in recent times constitute a threat to the public peace and order in the nation’s capital.

It would be recalled that during the BBOG’s march to the Villa Tuesday, they were confronted by another group, which claimed that the campaigners for the release of the Chibok school girls had turned it into an anti-government group

In apparent support of this line of thought, Mr. Idris, who was confirmed by the Council of State as substantive IGP on Wednesday, accused the BBOG of “over dramatizing” its campaign for the release of the Chibok girls and attempting to “arm-twist” the government of the day in order to achieve its aim.

Idris spoke in Abuja while receiving the National President of the National Council of Women Societies (NCWS), Mrs. Gloria Shoda and other executive members of the association.

He said: “The police management is aware of the agitation and the plight of parents of the abducted Chibok schoolgirls and other civil groups. As parents ourselves, we sympathize with them in these trying moments.

“Evidently, the government has invested huge resources in ensuring that the girls are rescued and re-united with their various families.

“However, the activities of the BringBackOurGirls group in Abuja, the nation’s capital recently, is becoming worrisome and a threat to public peace and order.

“#BringBackOurGirls protagonists must understand that in the exercise of their rights, they must not trample on other peoples’ rights through ‘over-dramatization’ of emotions, self-serving propaganda and disrespect of public (office) holders.

“The police will not sit on the fence and watch such a scenario unfold. The rights of law-abiding citizens must be protected within the context of the law and we believe that enough is enough.

“I watched them on Television saying they were enforcing their rights. Every citizen of this country has rights and we believe that where your right ends, the rights of others begin and we should try to conduct ourselves in such a way that everybody in the process of enforcing right, do not encroach on the rights of others.

“I believe that blocking the highway or stopping traffic and over dramatization of emotion, trying to confront and provoke policemen, I don’t think that is part of enforcement of rights because even the policemen have rights and they are doing it lawfully.

“The essence of procession is to bring the attention of the society or the government to your plight and I think the demonstration has been going on for too long. We believe and advice that it is time for them to maintain some level of control so that people of Abuja can live in peace and tranquility.

“We however ask that they tread with caution and that their grievances be channeled within the ambit of the law”.

The IGP told the BBOG campaigners to be mindful of the movement of other persons as enshrined in Chapter 4 Section 41 of the 1999 constitution as amended.

“Pressure groups should not resort to arm-twisting of government in order to achieve their aim”, he added.

Earlier, the NCWS President commended the police for maintaining the peace in the Federal Capital Territory in spite of the BBOG protests.

“We recognise that one of the vocal groups, the BringBackOurGirls, has in recent times had near clashes with you (police). We use this occasion to appeal for calm and patience so that these kinds of situations do not get out of hand”, Mrs. Shoda pleaded.