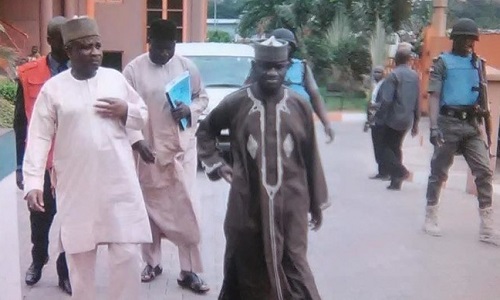 The former Naval chief was arraigned alongside two others on a four count charge bordering on criminal conspiracy.

A statement by EFCC spokesman Wilson Uwujaren, said they were docked alongside Habour Bay International Limited.

The EFCC accused Jibrin of buying a house worth N600million from the account of Naval Engineering Services without the said purchase contract being captured in the budget.

It was also alleged that the documentation for transfer of ownership of the property was done such that a private company owned by the family of the first defendant (Vice Admiral Jibrin) became the buyer.

The offence is in contravention of Section 26 (1) (b) and punishable under Section 22 (4) of the Corrupt Practices and Other Related Offence Act 2000, the EFCC said.

The defendants pleaded not guilty when the charges were read to them.

In view of their plea, counsel to EFCC, Abdullah Faruk, asked the court to pick date for commencement of trial.

However, Y. C. Maikyau, SAN, representing the first and fourth accused, through an oral application made pursuant to Section 36(5) of the Nigerian Constitution, sought for the bail of his clients.

Maikyau told the court that the defendants had been enjoying administrative bail granted them by the EFCC and had never breached any of its terms.

The defence counsel stated that, though he had earlier filed and served the prosecution with a formal bail application, he felt the need to move an oral application subject to the discretion of the court.

Counsel representing second and third accused relied on the arguments canvassed by the learned silk in seeking bail for their clients.

In response, the prosecution lawyer told the court that he was served this morning and asked for time to enable him respond appropriately.

After listening to the submissions of counsel on both sides, Justice A. S Umar adjourned to tomorrow (today) for hearing on the bail application.