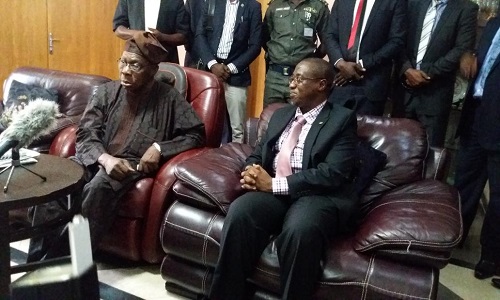 Former president Olusegun Obasanjo on Wednesday has described the Federal Government’s plan to sell some of its national assets as a “wrong move”.

This is just as he said that if there is any organization that can help Nigeria quickly get out of recession, it is the Nigerian National Petroleum Corporation (NNPC).

The former president said he believes organizations like the NNPC should be reformed and not sold.

He stated this in Abeokuta, the Ogun State capital when he received the Group Managing Director of the NNPC, Dr. Maikanti Baru, who paid him a courtesy call.

Obasanjo had in a goodwill message at the opening session of a two-day National Council of Finance and Economic Development (NACOFED) in Abeokuta on Tuesday, said he did not see why 48 per cent of the NNPC cannot be privatized.

But he told his guest on Wednesday that, “It is our dream to see NNPC grow as an NOC (National Oil Company) just like its peers in other countries. I have said it at the NACOFED confab in Abeokuta yesterday that I don’t understand this talk of selling our national assets”.

“What I do understand is reforms. I believe organizations like the NNPC should be reformed. Selling of national assets is wrong. But reform is what I think it should be so that we can run the business the way it should be run.

“If there’s any organ that can help us quickly get out of recession, it is NNPC. If you work hard, you can get around the situation”, NNPC quoted the former president as saying via its official Twitter page.

In his response, Dr. Baru commended the “positive influence” of Chief Obasanjo especially in his discussions with President Muhammadu Buhari on issues.

He said the NNPC is working hard to flood the market with kerosene so that prices will come down especially in the South East.

“We’ll continue to work hard towards realizing your lofty dreams of seeing NNPC grow into a transformed national oil company without any interference”, Baru said.