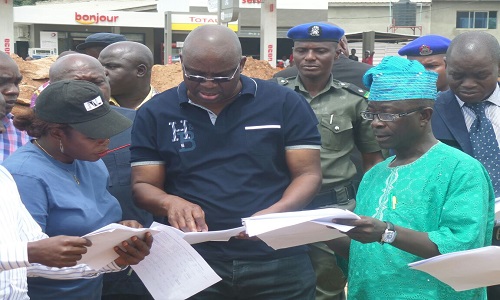 Governor Ayo Fayose of Ekiti State has renewed his commitment to demolish more houses in Ado Ekiti, the state capital, to pave the way for the flyover project.

Speaking yesterday evening during this month’s edition of his media chat, “Meet Your Governor”, aired on the major electronic media in the state, the governor said the demolition would commence next Monday.

According to him, the demolition of houses and other structures on the flyover route was to build road, aside the bridge, to ease movement and traffic.

He, however, apologised to residents, motorists, pedestrians and commuters coming in and out of Ado Ekiti for inconveniences experienced during construction of the flyover.

It would be recalled that during his first tenure, Mr. Fayose demolished houses to allow for dualization of the road from Okesa to Ijigbo area of Ado Ekiti.

On the current demolition exercise, he said “From next Monday, houses will be demolished for the road construction to complement the flyover. We are also going to demolish buildings constructed along flood plains”.

He said: “We will have a low-key celebration; if it is only prayer we will organise to mark the day, we are going to do it because of the economic situation of the state. We must live within the ambit of our resources”.