Comedian of the Federal Republic of Nigeria , Gandoki, is set to surprise his fans and the world by breaking THE WORLD RECORD FOR THE LONGEST STAND –UP COMEDY PERFORMANCE BY AN INDIVIDUAL, Gandoki will be hosting fans, brand executives and industry colleagues  to a 48 hour non-stop comedy performance.

The event would take place in front of a live audience (we shall be making available exclusive-free tickets for the event). The entire performance would also be recorded and streamed live online (www.thecliqueafrica.com). Arrangements are also being made for full media coverage of the event on both terrestrial and cable TV. This event is billed to start on Thursday 29th of September, 2016 and climax on Saturday 1st of October,2016.

The Guinness World Record has been contacted to award the certificate upon setting a new world record.The World Record attempt for “Longest Stand-Up Comedy Performance by an Individual” is our own way of exposing the immense talent and resilience of the Nigerian people to the world at large. The current record stands at 40 hours and 8 minutes and was set in the US. We aim to beat this record with a 48 hours continuous performance.

The Event would be holding at The Exclusive Mansions Hotel, Opposite Landmark Event Centre, Water Corporation off LigaliAyorinde Street, Victoria Island, Lagos.

Gandoki (Tony MofeEreku) is one of the pioneers of the comedy industry, compeer and a professional entertainer in Nigeria, born in Warri delta state started alongside Alibaba, AyComedy, Basketmouth, Gordons to mention a few. He prides himself with the record of comedian with the longest performance on stage in Nigeria (unofficial).He has been part of so many successful comedy shows and outfits in Nigeria, Europe and North-America.His name remains a household name everyone can connect with. Gandoki is a recipient of many awards.He is currently signed to RG5 Management a subsidiary of Reitigh G. Nig. Ltd (Reitigh Group) home to other talents such as Dj Consequence, Sandra Ogbebor(Miss Globe 2014/2015 beauty pageant) &Damz.

We would be attempting to set a New World Record to bring international acknowledgement to Nigeria’s entertainment industry. The record we are breaking is for “The Longest Stand-Up Comedy Performance by an Individual”. The current record for this was set on April 29-30, 2013 by David Scott in the United States and stands at 40 hours 8 minutes. We would break this record with a 48 hour non-stop performance.

∞Gandoki rate my IG (send in a picture to the show and let Gandoki rate it) – This segment would entertain pictures and images uploaded via instagram where the Comedian gives a rating of 1 – 10 after extensively analyzing the image in a humorous manner.   (TARGET INSTAGRAM/SNAPCHAT)

∞Doctor Gandoki – xtreme (tell Doctor Gandoki your problems and he’ll proffer a solution) – This is a segment of the performance where audience viewing from home can send in personal messages (problems) and receive hilarious responses from the comedian. i.e.My boyfriend   beats me but I still love him, he just proposed should I accept? (TARGET MEDIUM = TWITTER/FACEBOOK)

∞Roasting (section where Gandoki takes on celebrities in attendance) Our back end team captures highlights of these moments and creates memes and funny clips which can be shared on social media and used as DP’s.   (TARGET ALL SOCIAL MEDIA PLATFORMS)

This event is arguably the biggest and most anticipated event in the month of September, the tension, doubts, beliefs around it provides for excellent engagement of the audience as the world looks on to see if we can pull this off. We are really looking forward to you joining us to make History, as we show the world that Nigerians are indeed immensely gifted. Thank You 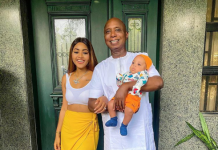