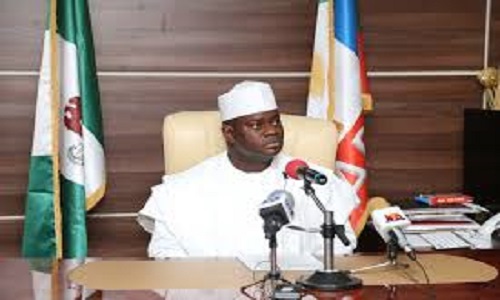 Governor of Kogi State, Alhaji Yahaya Bello, has congratulated the people of Edo State and the All Progressives Congress over the victory of Godwin Obaseki – the governor-elect of the state.

The Independent National Electoral Commission, INEC, on Thursday declared Obaseki of the APC winner of Wednesday’s governorship election in Edo.

Gov. Bello described the victory as further confirmation of Nigerians’ belief in the change agenda of the APC under the leadership of President Muhammadu Buhari.

The governor, who stated this through a press statement signed by his Chief Press Secretary, Kingsley Fanwo, hailed the conduct of INEC, the Edo people and security agencies, who ensured a hitch-free exercise.

“I salute the gallantry of the Edo people who conducted themselves peacefully throughout the election. They spoke with a united voice in support of the change agenda of the President Muhammadu Buhari administration.

“The Independent National Electoral Commission also used the Edo poll to prove to the outside world its efficiency, ingenuity and neutrality. The security agencies, poll observers and all stakeholders who made it possible to conduct a free, fair and credible poll in Edo State.

“My message to the Edo people is to believe in Obaseki. My message to Obaseki, the Governor-Elect, is to build on the solid legacies of the Comrade Governor, Adams Oshiomhole. You have spoken today. In the next four years, Edo State will be better.

“Obaseki is an excellent technocrat, an administrator per excellence, a pragmatic leader. It is time to bring all these qualities to bear on the development of Edo State. As neighbours, Kogi and Edo states will continue to collaborate for development”.

Governor Bello also eulogized the outgoing Governor of the State, Comrade Oshiomhole, for “changing the face of politics in Edo State to that of development and of transformation”, saying his years in Edo State “heralded true change and progress”.