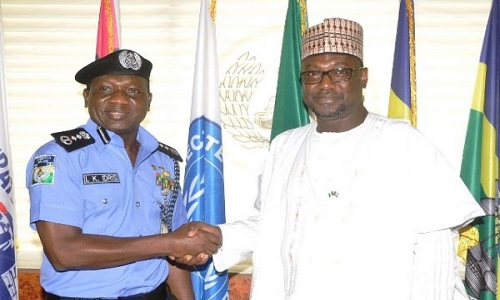 Governor Abubakar Sani Bello of Niger State on Thursday advised the Inspector General of Police, IGP Idris Koptun Ibrahim, to remain focused and justify the confidence reposed in him.

Governor Bello said though the new IGP was leading the police force in a trying time, he should consider his confirmation as a challenge and greater responsibility to bring his experiences to bear for a superlative stewardship.

According to the governor, the IG needs to remain focused for the police to reassert itself as a vital institution in government’s efforts at restoring peace to trouble spots.

“Being the lead agency in internal security, the police, under your watch, should strive to build on the gains recorded by the military in the fight against terrorism by finally restoring peace, security and civil life to the affected areas.

“I enjoin you to, as a matter of priority, reposition the police to effectively provide efficient policing and a more proactive service to the people. The much talked about community policing should be given attention so that the force can effectively provide the much needed security”, Gov. Bello said.

Mr. Ibrahim, who hails from Niger State, was confirmed on Wednesday by the Nigeria Police Council as substantive IG of Police.