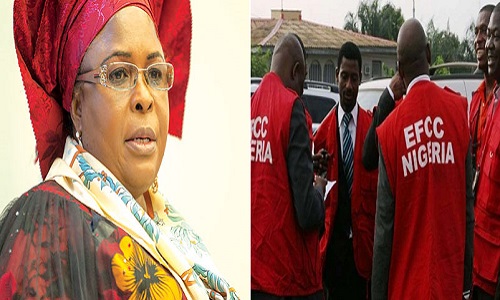 Some lawyers under the aegis of “Human Rights and Corruption Activist” yesterday called on the Economic and Financial Crimes Commission, EFCC, to treat any evidence of financial misconducts against former First Lady, Dame Patience Jonathan, with caution.

The anti-graft agency recently froze about $31million belonging to the former First Lady while four companies, allegedly used to launder about $15.6million of the sum on behalf of Mrs. Jonathan, have pleaded guilty to the offence.

But the lawyers, represented by Barrister Ugchukwu Osuagu, said at a media briefing in Abuja on Sunday that the former First Lady must be treated fairly.

They equally urged the EFCC not to compromise its status as an impartial anti-corruption body.

“We are not against the fight against corruption by the EFCC, but, let it be done with decency. The EFCC must not be seen as unleashing so many vendettas and carefully planned rehearsed acts of witch-hunt against Mrs. Jonathan”, the lawyers said.

Barrister Osuagu said his group, which was in contact with Mrs. Jonathan, had “discovered that she was neither a director nor a signatory of the companies linked to the money laundering charges”.

According to him, “She did not open any bank account in the name of any company and had mandated that the accounts be converted to her personal names which were never done.

“It was in 2013/14 or thereabouts that she was given the ATM cards for all the three accounts; where in two of the accounts belonged to her mother”, he added.