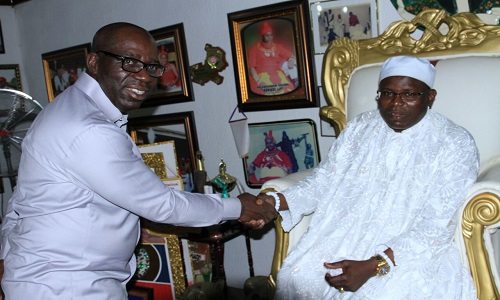 The Enogie of Eyaen, Osazuwa Iduriase, has condemned the Peoples Democratic Party (PDP) for publishing in an online medium that he chased the All Progressives Congress (APC) governorship candidate in the state, Godwin Obaseki, out of his palace.

The monarch expressed shock that a political party, which was seeking to lead the state, could peddle lies just to win votes.

Iduriase said he was in the United States at the time the report said he refused to receive Obaseki.

While predicting victory for the APC at the governorship election, the Enogie said Governor Adams Oshiomhole has earned his respect for developing the state.

He said, “We have a problem with social media because so many lies are being peddled there.  I got a call that I drove Obaseki from my palace. I said what me that was in America. How can someone that was outside the country be at his palace at the same time? That was why I said when I come to town I will see you personally.

“If you look at the history of my people here, you will know the kind of people we are. As you now come here, we will tell our people about your ambition.

“I will have to thank you also for the way you have conducted yourself in this campaign and I know that in the election, you are going to emerge victorious.

“I pray our ancestors protect you before and after the election”.