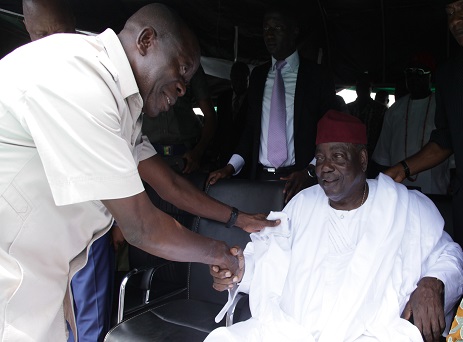 A former Military Governor of Old Midwest and Bendel States, Dr. Samuel Ogbemudia, has formally canvassed support for the candidate of the All Progressives Congress (APC) in the September 28, 2016 governorship election of the state, Mr. Godwin Obaseki.

“So, I want them to go back home to go and make sure that every one of them here today has a hundred persons queuing behind them to vote for Obaseki”, Ogbemudia said.

The retired Brigadier-General spoke at his 84th birthday celebration hosted by Edo state Government on Saturday in Benin, the state capital.

The former military governor expressed optimism that Obaseki will continue with the good works of Governor Adam Oshiomhole, whose tenure comes to an end in November.

According to the respected elder statesman: “I want to appeal to the people of Edo state through those who are here on the 28th of September is a date of decision, a date that we will decide our future.

“We have two options either to remain as we are and nothing happens and two years from now we will be looking for boats to drive through the roads because they would have been flooded or we work hard, get the right person to carry on where Comrade Oshiomhole left it.

“So that option is staring us in the face but for me I took the option to get somebody who understands good governance to carry on from where Comrade Oshiomhole is leaving it”.

He said the outgoing governor is bequeathing a legacy that history will not forget.

Ogbemudia explained: “This month of September is the last September in a long series of years that Oshiomhole will be a governor.

“By the next September, he will be a member of my club of former governors therefore he has done enough.

“He has left sufficient evidence for historians to appreciate and many years to come they will be falling over each other to determine what make you do this or that and I think you have had a wonderful wisdom and that wisdom will live with you forever”.

The Octogenarian spoke just as the government renamed the New Era College, which he built as a military governor, in his name.

In his remarks, Oshiomhole described Ogbemudia as a great man of wisdom whose advice he never took lightly and which helped him tremendously in the task of governance.

“I remember whenever I visit

“Whenever I listen to the advice to do those things you advised me to do, I discovered that I always achieved great success.

“We celebrate you because we speak for Edo people. When I visited Igbanke, they said the last time anybody remembered them was Ogbemudia.

“And when I went to Abudu, the people said the last time they had development was when you were governor.

“When I went to Ihievbe, the said the road that linked the community to Auchi was built by you.

“When I went to Michael Imoudu College of Physical Education, they said everything in that school was made by Ogbemudia”, the governor said.