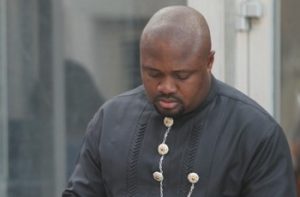 Abubakar is a prosecution witness in the ongoing trial of Dudafa and one Iwejuo Joseph Nna, also know as Taiwo Ebenezer and Olugbenga Isaiah before Justice Mohammed Idris over alleged N5.1 billion fraud brought against them by the Economic and Financial Crimes Commission (EFCC).

The witness, who is the Chairman of Namuduka Ventures, Yamusa Oil and Gas Limited, and Yumusuka Ventures, said he had came in contact with the accused person when he was Balyesa State’s Commissioner for Local Government, under Timpreye Sylvia regime.

Abubakar, who was led in evidences-in-Chief by EFCC prosecutor, Rotimi Oyedepo, said the transactions between him and Dudafa were done via text messages, except on one occasion when he went to the Aso Rock Villa to collect some naira which he changed into dollars and transferred such into the accounts of the four companies.  Giving the graphical details how he changed Nigeria Currency,  naira, to United State of America dollars,  the EFCC witness stated that he received a text message from  Dudafa on January 22, 2015, to pay naira equivalent of $400, 000 USD, into the account of Digest Fast food and Restaurant account with number 0042308724, domiciled in GTB.

He also stated that on February 7, 2016, Dudafa instructed him through a text message to pay the sum of N10.3 million, into the account of Lanhir Travels and Tours limited, account number 1012400949, domiciled in Zenith bank. He however informed the court that there was no any contract or business between him and the two companies.

The witness further informed the court that he paid the sum of $50, 000 USD naira equivalent to the account of one Festus, one of the  people working with Dudafa. Adding that he went to the Villa and collected the sum of $4 million USD, and paid its naira equivalent into the accounts of the Pluto, Seagate, Avalon, Rotato and Ebiwise Resources, companies belonging to Dudafa in May 27, 2015.