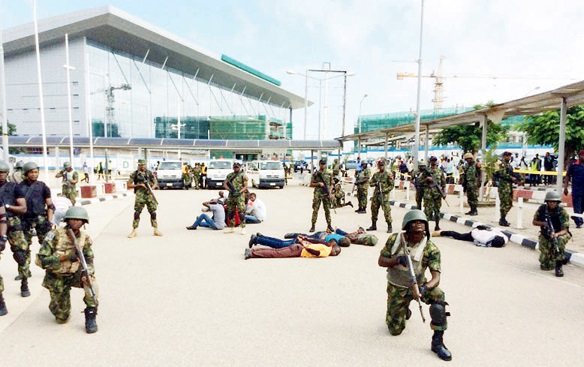 The Special Forces simulated an insertion and extraction exercise of a terrorist hijacking situation in the middle of the international wing of the Airport on Wednesday.

In an interview with journalists, the Air Chief said the exercise is very significant because the regiment forces and quick response forces, are participating in this exercise.

Air Marshal Abubakar stressed that the exercise would be continuous just as lapses observed during the simulation, would be rectified.

“I am happy we have been able to test the plans we have for this airport and whatever gaps there are we will go back and fix it. The evaluators are here to see if the plan can be effective. What we want is to have a force that will be effective in the event of attack on our airport; you can have the training, you can have the skills, unless you are tested from time to time you won’t be able to know if there will be gaps”, he said.

Abubakar said he would test the cooperation of other agencies to know where there would be problems and how to fix it.

“The essence is to ensure there are no gaps, and we need to have the cooperation of other agencies; coordination with other agencies must be evaluated from time to time to know if there will be problems in a real situation. What I have seen this morning, I am satisfied, I want to appreciate the airport authority and other agencies, the Army and the Navy are here with us and other agencies”.

The Air Chief, however, denied that the Nigeria Air Force is anticipating an attack on one of the nation’s busiest airports, insisting the exercise is just a test.

“We are not anticipating anything; as I said this is just an exercise, it is important that you evaluate your plans from time to time, this is not because we are anticipating anything. We have at least an idea of what is likely to happen should there be this kind of situation, we pray that we don’t have this kind of situation but we must be prepared to also be there should it happen.

“We will go beyond what we are doing here. We will look for other airports. This is just within the terminal building; assuming we have terrorists coming from the other end of the runway, can we deploy our aircraft to be with them even before they get to the terminal building?

“We are starting with Nnamdi Azikiwe. We are going to Lagos, Port Harcourt, Kano, and we have enough Special Forces trained to undertake this kind of operation. We have deployment in most of our airports, they are in different parts of the country and can be mobilised without any difficulty”, he said.