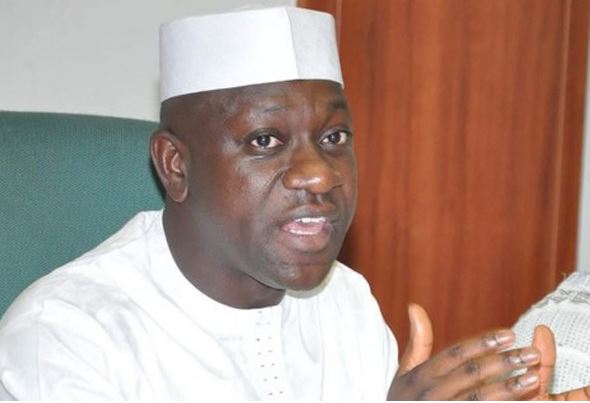 The House of Representatives on Wednesday suspended its former Chairman, Appropriations Committee, Abdulmumin Jibrin, from the parliament for 180 legislative days (roughly one year).

He was also banned from holding any position of responsibility in the House for the rest of the 8th National Assembly.

In addition, he would tender a written apology to the House on resumption from suspension.

This followed the adoption of the report of the House Committee on Ethics and Privileges which investigated allegations of breach of privileges of the House and its members by Jibrin.

He also accused his colleagues of systemic corruption which he said he had a divine mandate to expose with a view to engineering reforms.

His public statements angered members of the House who were then observing their annual recess.

On resumption, the Chairman of the House Committee on Rules and Business, Emmanuel Orker-Jev, moved a motion citing a breach of the privilege of the House and its members against Jibrin.

The matter was subsequently referred to the House Committee on Ethics and Privileges for investigations.

Presenting the report on the floor of the House during plenary on Wednesday, the Chairman of the Committee, Nicolas Ossai, said after a week-long investigation, his panel found Jibrin guilty on all counts.

Ossai said, “Hon Orker-Jev underscored the gravity of the allegations (made by Jibrin) as a calculated campaign of calumny, denigration of the House and publication of false and scandalous statements with libellous, contemptuous and defamatory contents in various media platforms.”

He said during its sitting the committee received oral evidence, electronic records and written documents from Orker-Jev and Channels Television.

As part of his testimony before the committee, Orker-Jev was quoted as quoting Jibrin as saying,

“As it stands today, these corrupt elements have infested the House, making the institution a hub of systemic corruption.

He tendered copies of The PUNCH, and several other national and regional newspapers as well as discs containing visual and audio recordings of Jibrin making these comments on national television.

Ossai expressed regret at the respondent’s refusal to honour the committee’s invitation even when it agreed to make the hearing public.

The committee said from its findings, the fact that Jibrin made the statements credited to him was not in doubt.

“…That the committee considers that the actions of Hon. Abdulmumin Jibrin, taken as a whole, amount to an infraction of Sections 21 and 24 of the Legislative Houses (Power and Privileges) Act and the rules of the House.

“The committee finds that Hon. Abdulmumin Jibrin breached the practices, precedents and usages of the House of Representatives in that the House has established a procedure for expressing and redressing grievances which he didn’t follow.”

The committee then recommended that “Abdulmumin Jibrin, should be reprimanded in accordance with Chapter 9(1) of the Code of Conduct for Members of the House of Representatives.”

Deputy Speaker of the House, Yusuf Lasun, who presided over the session, put the committee’s report and its recommendations to a voice vote and it was unanimously approved.

In his reaction to the development, Jibrin said the entire process leading to his suspension was flawed and as far as he was concerned, “it is a non-issue and complete nonsense and it is not going to stand anywhere in the world.

“As you are aware, the matter is a subject of litigation, I have instructed my lawyer, Femi Falana SAN, to file charges of contempt against Speaker Dogara and of course the House of Representatives and I’m sure the matter will move over to the judiciary and decision will be taken. I’m pretty sure it will be in my favour.”

In a message sent to our correspondent via email, Falana said, “It is the height of contempt. It is a primitive resort to self-help by the House of Representatives. Since the matter is in court, the House deliberately breached its rule of not interfering with pending judicial proceedings.

“In his desperation to cover up the scandal the Speaker, Honourable Dogara, made himself the accuser, witness, prosecutor and judge at the same time and thereby breached the elementary rule of nemo judex in causa sua (thou shall not be a judge in your own cause).”