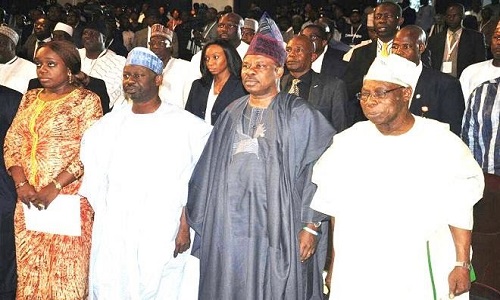 The former president also accused Jonathan of lifting the ban on importation of products like toothpick, which he said could have been taken over by local industries without encumbrances.

Obasanjo, who spoke at the official opening of the National Council on Finance and Economic Development (NACOFED) in Abeokuta, Ogun State yesterday, said the only way Nigeria could urgently step out of the current economic recession is for it to seek foreign loan.

The former president, who was the Father of the Day at the opening session, said he had warned former President Jonathan on the impending recession in November 26, 2014 when he joined others to celebrate the birthday of pioneer Chairman of the Independent Corrupt Practices and other related offences Commission, ICPC, retired Justice Mustapha Akanbi.

“I reminded the government that we were spending more than we were earning; that very soon, the country would not be able to fund the budget… Unfortunately, the government then refused to listen to my advice”, he told the gathering.

Obasanjo went further to state that when he discovered the ban on the importation of toothpick was reversed by the Jonathan administration, he visited the then president in Abuja to ask why he lifted the ban on toothpick and Jonathan said he did not read before he approved.

Speaking further on the way out for Nigeria, Obasanjo said there were three options, explaining, “The three options are we have to spend less, we must endeavor to earn and then the last one is to borrow, and this if we must, we do it fast and now”.

He, however, cautioned against doing the bidding of the World Bank and International Monetary Fund (IMF).