Kelechi Iheanacho’s 77th-minute goal handed Gernot Rohr his first win as technical adviser of the Super Eagles. Iheanacho’s brilliant solo effort from distance settled the encounter which the Nigerians dominated but had failed to score until his strike.

Iheanacho’s is regarded as one of the best youth prospects in the world and he showed just why as he put the ball in the back of the net. With Aguero out of contention for the next three games, will he be able to stake his claim for a first-team place? 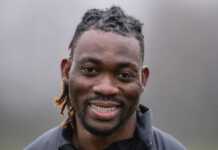