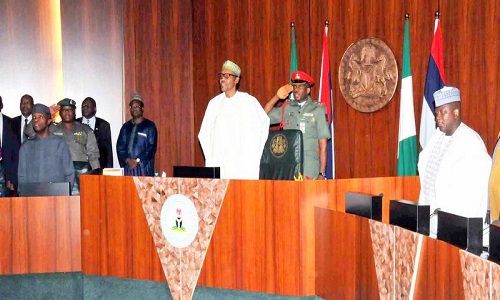 Until a few years ago, Africa Rising was a dominant theme in conversations about the global economy. A lot of that enthusiasm appears to have since cooled, so that in newsrooms and think-tanks and conference panels around the world, the confident assertion of ‘Africa Rising!’ has been replaced by the questioning stance of ‘Africa Rising?’

While some of that pessimism may be justifiable, considering the times, I remain fully convinced that this is not the time for us to distract ourselves with lamentations about the circumstances in which we find ourselves. Instead of sitting and hoping for commodity prices to rise, African countries should actually embrace these times with excitement, and take the opportunities they present for laying a foundation for the kind of economic growth that transforms the lives of our people.

Indeed one of our biggest challenges during the boom years was that we failed to convert it into jobs and improvements in standards of living on a significant enough scale. This is why, as I recall, there was much debate, during those years, about how to ensure that the growth became ‘inclusive’.

Now that we are face to face with the vulnerabilities that the years of plenty somehow managed to hide, we should boldly seize the chance to turn away from the unhelpful habits of the past, and chart a new course for our countries. Since I signed the 2016 budget into law in May, the Ministry of Finance has released more than 400 billion Naira for infrastructure spending – more than the total amount spent in 2015.

In the face of dwindling oil revenues we are turning to debt. We have commenced the process of raising a $1 billion Eurobond, our first in three years. We are also raising debt from the World Bank, African Development Bank, the Chinese Ex-Im Bank and other development finance partners.

Unlike in the past where borrowed funds were frittered away on unproductive ventures, we will ensure that the funds are invested in the revival of stalled road, rail, power and port projects, and in agricultural initiatives that will significantly boost domestic production of food. For far too long we have under-invested in the most critical element for creating sustainable economic growth – infrastructure. The net effect of this has been an avoidably high cost of doing business in Nigeria.

But even more important than what the government is able to spend, is the limitless investment potential of the private sector. This is why one of our main priorities is creating an environment in which private sector capital can thrive. We are in particular using Public Private Partnership (PPP) models across the country, as we support game-changing private sector infrastructure projects in power, refining, gas transportation, and fertilizer production.

We are also putting in place measures to ensure that monies intended to revamp our infrastructure do not end up in the pockets of corrupt officials and their collaborators. Already we are investigating the theft of several billions of dollars in public funds by the previous administration. These were funds meant to build roads and railway lines and hospitals and schools, and to equip our military – which has for the last seven years been fighting one of the deadliest terrorist groups in the world.

We are not only bringing these corrupt officials to justice, we are also setting up systems to make it impossible for such a grievous abuse of public trust to ever happen again. There have been cases of persons under investigation claiming to be victims of a witch-hunt, but there is no doubt that the real victims here are the people of Nigeria, who have a right to expect that public funds will be spent to improve the lives of the people. Let me also state clearly that we are as committed to playing by the rule of Law as we are to ensuring that every Naira is accounted for, and recovered from those who have plundered the treasury.

I am delighted to say that we are already seeing the results. Our troops, long starved of morale, on account of the levels of corruption in the upper echelons of the military, have now put Boko Haram permanently on the back foot. In the northeast, some of the more than 2 million persons displaced by Boko Haram have started returning to their homes. Just last week the people of the Northeast celebrated the first incident-free Eid in years.

Our troops have rescued thousands of men, women and children trapped in areas held by Boko Haram. This has led to a massive humanitarian emergency, and we have with the UN and other partners been involved in the enormous task of providing food, medical help, and shelter, amongst other needs, to the displaced. We will continue to work hard to ensure that no victim is left behind, including the 219 Chibok girls, who have, since their abduction in April 2014, served as a global symbol of the war against Boko Haram, and a reminder of the horrors that Boko Haram has inflicted on innocent Nigerians.

Even though the times are still dire, from the point of view of the economy, our recovery plan is already starting to show positive result. The share of Investment in GDP is at its highest since 2010. Inflation is slowing, manufacturing confidence is rising. People are seeing and seizing opportunities to make money catering to the needs of Africa’s most populous country. Finally, our Social Investment Programme – the most ambitious in Nigeria’s history – will kick off this month. In its first year it will provide cash transfers to one million of our poorest people, hot meals to five million primary school children, cheap loans to more than a million artisans and traders, and job opportunities in healthcare, agriculture and software and hardware development for half a million young people.

Of course the journey ahead remains a long and difficult one. Our double-digit inflation, currency turmoil, and downgraded ratings will not vanish overnight. But the real story here is not the challenges, which are all too visible, but the opportunities. We also know that the current recession is partly driven by the production outages in the Delta and the journey back to growth is within reach as we resolve the problems in that region.

We have learnt the necessary lessons. We will ensure that Nigeria does not slip back into a lazy and dangerous dependence on the price of crude oil. We will continue to insist on transparency and accountability in the use of government funds. And we will build an economy that prioritizes the ease of doing business and investing, and that thrives on the entrepreneurial energy and ingenuity of our people.

To achieve these objectives, Nigeria shall require robust and reliable partnerships such as we have with the United States.  This is why I value the Commercial and Investment Policy Dialogue that we have just launched with the Government of the United States, and which we shall announce today at the US-Africa Business Forum in New York.

Nigeria is now finally on the rise – and the months ahead will show evidence that this is a genuine and lasting ‘Rising’; one that touches, not just the statistical databases, but crucially the lives of the people who elected us to deliver positive change.