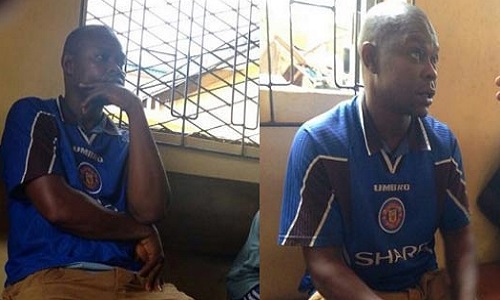 Mr. Joachim Chinakwe, the Ogun State-based trader, who made news headlines when he was arrested last month by the police and charged to court for naming his pet dog ‘Buhari’, has outdone himself, this time, he named his newly-born daughter after the wife of the president, Aisha Buhari.

The Assistant Inspector-General of Police (AIG) in charge of Zone II, Abdulmajid Ali, had in a statement to dispel speculations that Mr. Chinakwe was arrested on the orders of the Presidency, said the action was a pre-emptive move to prevent likely breach of public peace.

Mr. Chinakwe, who regards President Muhammadu Buhari as his role model, may have decided to go a step further by naming his three-day old baby girl ‘Aisha’, in recognition of the wife of the president and perhaps, to demonstrate that he had no ill-intentions when he named his pet dog ‘Buhari’.

Mr. Effiong was Chinakwe’s lawyer in the case reported to the police by his northern neighbor, Alhaji Halilu Umar, who was offended by the name the trader gave his pet dog.

1. Joachim Iroko Chinakwe, the man who named his dog 'Buhari' has done it again. He has just called to inform me that he has named his..

2. newly born baby/daughter after the wife of @NGRPresident. He has given his 3-day-old baby two names; Mise and Aisha. According to him…

3. Mise is a native Delta name which means 'I am doing it'. He said that he also named his daughter Aisha, after the wife of @NGRPresident

4. and that she will bear the two names concurrently. Sincerely, I am short of words. I never for once contemplated this.

Hopefully, Mr. Chinakwe’s latest antics won’t land him in any trouble with his northern neighbours or the authorities.