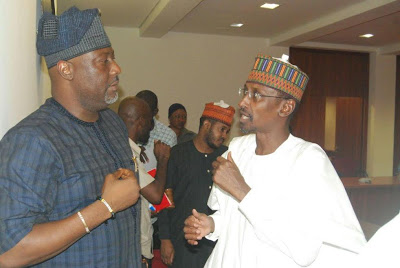 The senator representing Kogi West, Dino Melaye, on Monday asked the Minister of the Federal Capital Territory, Mohammed Bello, to order herdsmen out of the nation’s capital city of Abuja.

Concerns have continued to mount about the activities of herdsmen across the FCT in recent months, as cows could be seen wandering around the city center, resulting in unnecessary hold-up and constituting a menace on the roads.

Residents called on the FCT Administration to proffer solutions to the menace as the unchecked presence of the herdsmen was unbecoming of a modern capital city.

Speaking when the minister testified before the Senate Committee on the FCT, of which he is Chairman, Mr. Melaye expressed the upper legislative chamber’s displeasure with the activities of the herdsmen.

He recalled that Mr. Bello had earlier issued a directive against the activities of herdsmen within the city, which was ignored, saying a drastic action must be taken to end the menace.

“Honourable Minister, Senate as an institution is not happy at how Fulani herdsmen continue to move their cows across the city centre, which we are aware you have given directive against that some time ago”, Mr. Melaye said.

The senator suggested that Mr. Bello should direct municipal workers to move about with tools to either slaughter cows or seize them and place heavy fines on their owners.

“From now, get knives and ask your men to slaughter cows found in the capital city or prosecute herdsmen seen with cows in the city centre with a fine of N50, 000 per cow. This order must be carried out”, Mr. Melaye said.