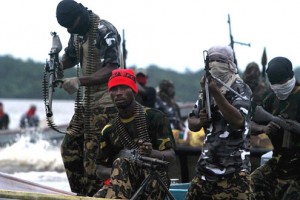 A soldier has been reported dead after an attack by suspected militants at Efut Esighi waterfront in Bakassi Local Government Area of Cross River State.

The attack occurred in the early hours of Saturday when suspected militants of the Bakassi Strike Force reportedly led by their wanted leader Benjamin Simplee (AKA G1) came in several speed boats and attacked the deployed troops.

2 militants were also killed during the attack, while some escaped with gun shot wounds, NTA reports.

The troops were later reinforced with more gunboats and air component, and a clearance and pursuit operation is said to have commenced.

The Nigerian Army said in a statement: ”We would like to assure the public that this singular act would not deter us from the discharge of our duties, therefore, the perpetrators of this dastardly act would be found and brought to justice.

”The Nigerian Army wish to send an unequivocal warning to all the criminal elements in the society that intent to attack any of its locations to have a rethink.”