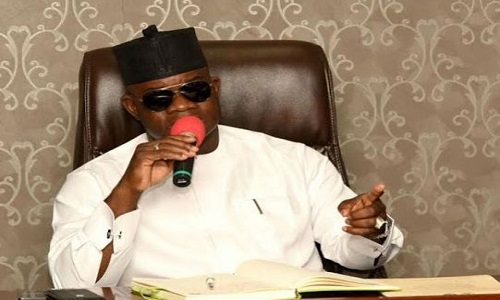 Governor Yahaya Bello of Kogi State on Tuesday described his victory at the Supreme Court as a “big honour” to democracy in Nigeria.

In a statement shortly after the court affirmed him as elected governor of Kogi, he said the judgment would remain a watershed in the annals of electoral jurisprudence and constitutional law in the country.

The Supreme Court on Tuesday upheld the election of Bello of the All Progressives Congress by dismissing the prayers of James Abiodun Faleke, the running mate of late Prince Abubakar Audu, the initial flag bearer of the party.

The seven-man panel, led by Justice Sylvester Ngwata, affirmed the election after listening to the closing statements of all the counsels.

The apex court, however, said reasons for its decision to strike out the case would be made known on September 30.

In his reaction to the ruling, Gov. Bello said “It is a long walk to victory which will reshape the nation’s constitution.

“I am humbled and magnanimous in victory; it is a long walk to victory.

In the statement signed his Chief Press Secretary, Kingsley Fanwo, the governor also advised his supporters to guide against wild jubilation but to use the occasion for sober reflections.

He said he would pursue his cardinal goals of improving education, healthcare, infrastructural development as well as raising the capacity of the citizens to reinvigorate the state’s economy.

Mr. Bello commended the judiciary for “rising to the occasion by standing firm with what is true and just”.

In its reaction, the state chapter of the Association of Local Governments of Nigeria (ALGON), in a statement in Lokoja, described the judgment as a victory for the rule of law.

The chairman of the group in the state, Taufiq Isa, commended the justices of the Supreme Court for the judgment, saying it had finally settled the contention over the governorship position.

“We are calling on stakeholders in the All Progressives Congress (APC) in the state to come together and join hands with the administration of Gov. Yahaya Bello in the interest of the development of Kogi”, Mr. Isa said.

On his part, a former acting governor of the state and chieftain of the APC, Chief Clarence Olafemi, described the Supreme Court judgment as a welcome development.

Meanwhile, the Peoples Democratic Party, PDP, candidate and former governor of the state, Capt. Idris Wada, has declined commenting on the ruling.

A terse statement by his spokesperson, Jacob Edi, said the former governor could not comment as he was yet to get the details of the Supreme Court judgment.