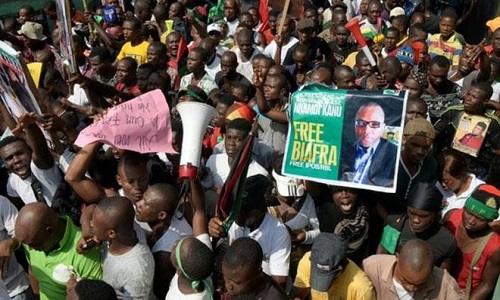 Former President General of Ohanaeze Ndigbo, Dr. Dozie Ikedife, has described as wishful thinking, the belief that Ndigbo would forget Biafra or jettison the struggle for self-determination.

Ikedife, who is the deputy chairman of the Supreme Council of the Indigenous People of Biafra (IPOB), also called on President Muhammadu Buhari to discard the thought that Igbo would be in a hurry to forget Biafra.

The president had while addressing youth corps members serving in Daura local government area of Katsina State when they visited him at his residence in the town about two weeks ago, told those among them from the South-east and Niger Delta region, to impress it on their kith and kin to forget about Biafra.

Also, at the just concluded 71st session of the United Nations General Assembly (UNGA) in New York, Buhari said he would not allow referendum on Biafra.

Speaking to newsmen yesterday in Nnewi, Anambra state, Ikedife vowed that nothing would make Ndigbo forget the 30-month civil war experience and what they suffered in the hands of the Nigerian government.

“How can we forget Biafra when the life of every Igbo man was reduced to worth only 20 pounds, and some of us refused to collect our own till date?

“How can we forget Biafra when the reconciliation, rehabilitation and reintegration were declared after the war and the first step was to go to Lagos and rebuild the Third Mainland Bridge?

“How can we forget Biafra when up till this day, the second Niger Bridge has not been constructed?

“How can we forget Biafra when for 30 months our territory was landlocked and we watched our children die of starvation? Tell us how we can forget Biafra? Tell President Buhari that we will never forget Biafra. Never!” he said.

The IPOB chief insisted that Biafra would never be forgotten even if all the people that experienced the war died, stressing that the story would continue to be told from generation to generation.

He also described last Saturday’s sit-at-home declared by IPOB as a huge success.

According to Ikedife, people obeyed the order, “not for fear of being molested, but to express their genuine quest and demand for self-determination”.