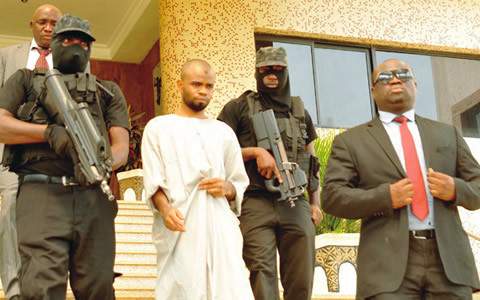 The Nigerian Prisons Service has dispelled reports that mastermind of the 2011 Christmas Day bombing in Madalla, a suburb of Niger State near Abuja, has been released from prison by the Federal Government.

Several online reports this week reported that Dikko may have been released as part of a purported prisoners swap deal between the Federal Government and Boko Haram sect.

But the NPS described the reports as mere rumour.

Mr. Dikko alias Kabiru Sokoto, was convicted in December 2013 after being found guilty of masterminding the car suicide bombing on St. Theresa’s Catholic Church, Madalla, in which 40 people were killed.

Boko Haram, in a video released last month, demanded the release of its members held by the government in exchange for Chibok schoolgirls abducted by the group in 2014.

While the government’s body language suggests it is disposed to a swap deal, the modalities for this have yet to be made public even as President Muhammadu Buhari has said his administration will negotiate with credible leaders of the sect, which is presently factionalized.

“There’s no truth in all the reports claiming that Mr. Dikko had been released”, Mr. Jeje added.