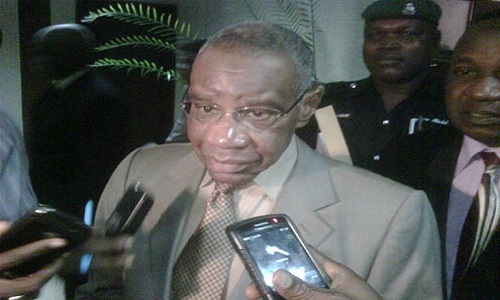 A former Chief Justice of Nigeria, retired Justice Dahiru Musdapher, yesterday lent his voice to calls for a negotiation of Nigeria’s unity, saying there was need to negotiate the country’s present status in order to understand root causes of its problems.

The retired Justice said this yesterday in Abeokuta, the Ogun State capital, while delivering a lecture titled, ‘The Question of Nigerian Unity’ at the 75th birthday of Chief Alani Bankole, father of former Speaker, House of Representatives, Dimeji Bankole.

Musdapher noted that the unity of Nigeria remains an “un-negotiated union in the minds of Nigerians, hence, the need for a clear understanding of the root causes of the seemingly confused system”.

He said Nigeria as a nation cannot come up with strategies and solutions capable of dousing the tension and bringing back the respectable and acceptable level of social decency without negotiation.

According to the former CJN: “It is rather worrisome that after 100 years since the amalgamation of the Northern and Southern Protectorates in 1914, we seem as divided as ever.

“What we call Nigeria today was the amalgamation of separate regions in an arranged marriage that some argue only lasted while the matchmaker, colonial Britain, was still around and in control.

“Over the past half-century, we dismantled the regions and created states, reduced the autonomy of the regions by forcing a centralised approach to governance, instituted the principles of Federal Character, Quota Systems, rotation and distribution of political offices based on geographic and ethnic consideration.

“Though it may appear harsh to dismiss the cumulative effect of these policies on the evolution of a national identity, we must in the least, concede that irrespective of the meagre gains recorded, these mechanisms are in need of comprehensive review”, he said.

The Speaker, House of Representatives, Yakubu Dogara, in his address, lamented that some Nigerians were bent on diving the nation.

“Nigeria represents the only hope of a black man anywhere in the world.  Attacking Nigeria is attacking the hope and aspiration of the black man. This is a time when nations are even surrendering part of their sovereignty to form a more prosperous union and it will be disheartening if discussions in this part of the world are centered on dismemberment of a nation”, he said.