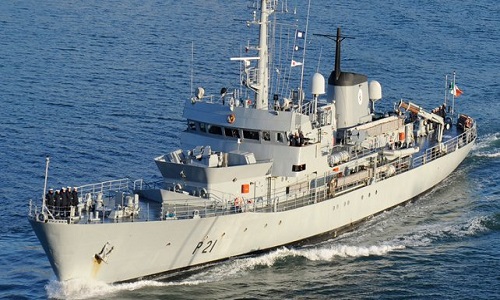 The Nigerian Navy Offshore Patrol Vessel (OPV), NNS UNITY, which was under construction in China has been completed and has commenced its maiden voyage to Nigeria.

The Vessel, which is expected to boost the Nigerian Navy’s operational capacity, especially in the war against piracy and other criminal activities along the country’s territorial waterways, is the Navy’s second stealth OPV to be built by the Chinese.

A statement on Wednesday by the Nigerian Navy’s Director of Information, Commodore Chris Ezekobe, said the Chief of Naval Staff, Vice-Admiral Ibok-Ite Ibas, was represented at the handing over and departure ceremony in China, by the Chief of Policy and Plans, Rear Admiral Jacob Ajani.

The Navy chief lauded President Muhammadu Buhari for approving all steps taken towards the departure of NNS UNITY.

He stated that the vessel, upon joining the fleet, would strengthen the efforts against all maritime crimes and illegalities in the nation’s territorial waters and the Gulf of Guinea in general.

Vice-Admiral Ibas added that the areas hitherto uncovered by other Navy ships will now be covered by NNS UNITY, which he noted, will no doubt enhance effectiveness and responsiveness to the maritime security challenges.

“NNS UNITY en route Nigeria will pay ‘port calls’ on some ports of friendly nations before arriving in Nigeria. This will further boost the existing cordial relationship with sister navies around the world and the Gulf of Guinea in particular”, the CNS said.

He also solicited the maintenance and improved cooperation between Nigeria and the respective China Ship building corporations beyond the departure of the vessel.

The statement said the ceremony was attended by Chairmen of the Committees on Navy in both chambers of the National Assembly, representative of the Minister of Defence; Hajia Rabi Tedman, the Consul-General of the Nigerian Mission in Shanghai and Senior Officers of the Nigerian Navy.

The new vessel, which departed the shores of China September 21, is due in Nigeria in the first week of November.