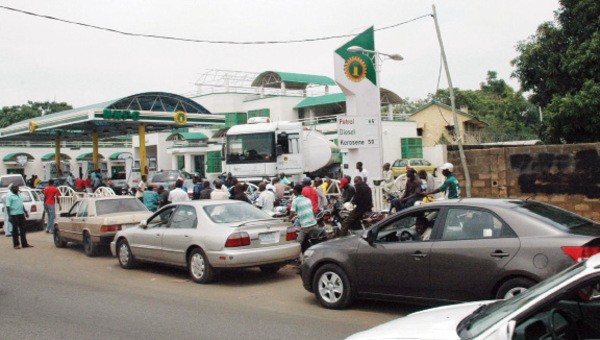 Nigerians can now heave a sigh of relief following assurance by the Federal Government on Monday that there is no plan to increase pump price of petrol.

There were speculations that the pump price of the product, currently capped at N145 a litre, was set to be reviewed upwards.

This fear was further heightened when former Group Managing Directors of the Nigerian National Petroleum Corporation, NNPC, at the weekend, called for an upward review of fuel price, arguing that the current price did not reflect the price-determining mechanisms of the commodity and the fluctuations of the foreign exchange rate.

The Minister of State for Petroleum Resources, Ibe Kachikwu and the Group Managing Director of the NNPC, Maikanti Baru, however, denied any plan to increase the pump price of petrol.

They gave the assurance after meeting behind closed-doors with President Muhammadu Buhari at the State House in Abuja earlier today.

Speaking with State House correspondents, Baru, in response to the question if there were plans to further increase the fuel price, said: “There is nothing like that! Go to the Petroleum Products Pricing and Regulatory Agency (PPPRA‎)”.

Mr. Kachikwu had earlier parried a similar question and directed the journalists to the GMD of the NNPC.

But when pressed further on any possible fuel price hike, the minister stated: “There is no more to that effect”.

Kachikwu specifically disclosed that there was no memo before the Federal Government seeking a review of the fuel price.