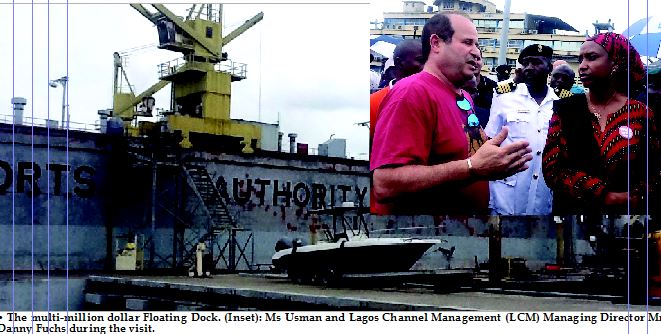 The Managing Director of the Nigerian Ports Authority, NPA,  has stumbled upon equipment worth billions of naira allegedly abandoned at the Continental Shipyard in Apapa, Lagos.

Ms Usman made the discovery when she visited the Lagos ports. Some of the equipment were allegedly abandoned by NPA when the ports were concessioned in 2006; others were said to have been abandoned in 2010.

The floating dock, it was gathered, could provide over 2,000 jobs; the slipway and the others could  provide about 2,500 jobs.

A senior NPA official said: “The floating dock has not been operational since 2010. The then management said pump and valve malfunctioning was the the reason the 6,000 tonnes floating dock could not pass its routine test of submerging and emerging.

“The routine test is usually carried out on two major occasions on the dock, namely after routine maintenance and or repairs or before lifting of ship for repairs, inspection or maintenance.

“NPA Floating Dock is a watertight structure designed to submerge sufficiently, by admission of water into its pontoon tanks to admit a vessel. The tanks are then pumped out, the dock and vessel will then rise until the latter is clear entirely of the water.

“In the course of restoring the emergence of the Floating Dock, one of its securing pins to the mooring dolphin snapped off and the dock generated momentum under the influence of hydro dynamic pressure caused by flood tides. This in turn caused the second pin to snap and the dock drifted under tidal influence and went to beach opposite Waziri jetty.’’

The official alleged that past NPA management did not adopt measures for the floating dock’s use.

“Despite that the contract for the repair of the floating dock was awarded by the past management of the NPA and a huge amount of money spent on it, we later discovered that there was no blockage of all the possible avenues that water can enter the engine and pump rooms of the dock as well as the closure of all, in and outlet valves of the dock and there was no diving inspection of the dock to identify any existing holes and malfunctioning valves.

“What we want the new management to do is to lead the way on how the multi-million dollar floating dock and the slipway can be restored to generate more revenue and employ many Nigerians,” the official said.