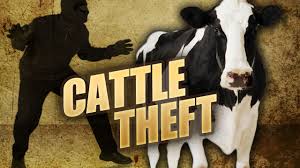 The Nigerian Security and Civil Defence Corps in Jigawa State said it had arrested two suspects over alleged armed robbery and cattle rustling.

The Commandant of the corps in the state, Mr Muhammad Durumin-Iya, told the News Agency of Nigeria on Friday in Dutse that the suspects were arrested in Birnin Kudu Local Government Area of the state.

Durumin-Iya said the suspects hailed from Tukuda village, and that officials of the command arrested them in Kiyako village on Thursday.

He explained that one of the suspects was arrested with a stolen cow, whose value was estimated at between N130, 000 and N150, 000.

He disclosed that an informant accosted the suspect while he was trying to transport the cow to Azare in neighbouring Bauchi state.

According to the commandant, the other suspect was arrested for aiding and abetting the suspected cattle rustler.

He added that the command had been trailing the suspect since July 2016, after an alleged robbery in Birnin Kudu.