The FBI led a major manhunt Monday for an “armed and dangerous” Afghan-born American wanted in connection with weekend bombings in New York and New Jersey as a third nest of bombs was discovered in his hometown.

Those attacks and a Minnesota stabbing carried out by a Somali-American whom police said made “references to Allah” also on Saturday have thrust security fears into the heart of the US presidential election, which is less than 50 days away.

Federal investigators released a mugshot of 28-year-old Ahmad Khan Rahami, who has brown hair, brown eyes and a brown beard, saying he was last known to live in Elizabeth, a town adjacent to Newark International Airport.

“Should be considered armed and dangerous,” they warned as text message alerts were sent to millions of people in New York, where President Barack Obama and other world leaders were attending the UN General Assembly. 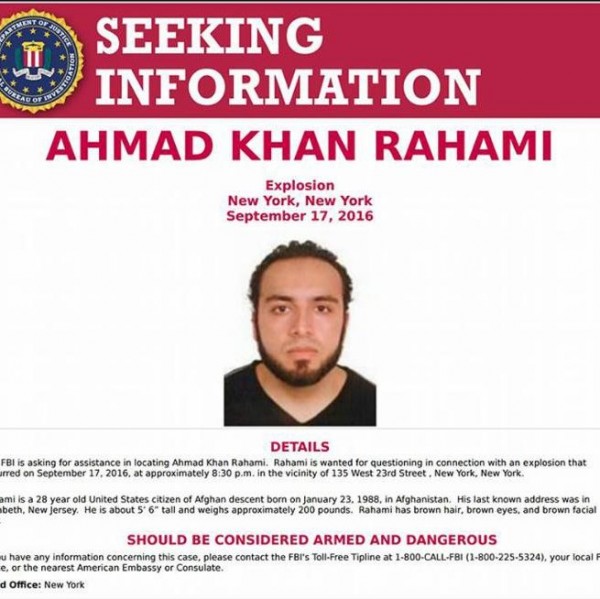 New Jersey State Police said Rahami was wanted for questioning in connection with both Saturday morning’s Seaside Park pipe bombing, which forced the cancellation of a US Marine Corps race but caused no injuries, and Saturday night’s bombing in New York’s Chelsea neighborhood that injured 29 people.

The discovery overnight of a nest of bombs at the train station in Elizabeth, which the FBI defused, led to suggestions that it may be linked to the two attacks in New Jersey and in Manhattan, where a pressure cooker bomb was also successfully defused four blocks away.

“They might have been a common linkage or a common person behind all the bombs,” New York Governor Andrew Cuomo said on CNN.

“I wouldn’t be surprised if we do find a foreign connection to the act,” he said, after saying Sunday that investigators had not yet found a link to the Islamic State group or any other foreign organization.

The release of Rahami’s name is the first major breakthrough in the investigation since the Chelsea bomb detonated, damaging buildings, shattering glass and sending shrapnel flying across the street.

White House spokesman Josh Earnest said Obama had been “updated through the night” and on Monday by his national security team.

“Our investigators are continuing to do really good work to get to the bottom of what exactly happened here. The president’s fully supporting them. He’s the one that’s in the loop being updated on this regularly,” he told CNN.

Fifteen years after the September 11, 2001 attacks, officials stress that lone-wolf attacks perpetrated by individuals who may be inspired by IS or Al-Qaeda propaganda are the greatest terror threat to the homeland.

What was still unclear Monday was whether an individual or a wider group was responsible for the bomb attacks and planted explosives. Seaside Park is around 69 miles (100 kilometers) from Elizabeth, and 90 miles from Manhattan.

“We do not know yet if it is only one individual, more than one individual or if it is an organized group or not,” New York Mayor Bill de Blasio told CNN.

“We know a lot more than we did just 24 hours ago. It’s certainly leaning more in the direction that this was a specific act of terror,” de Blasio told ABC.

New York police have beefed up massively in the city, fanning out reinforcements to bus terminals, subway stations and airports.

“We need the people’s help. Anyone with information about the situation, we need it now,” de Blasio told ABC.

Although there has been no claim of responsibility for the Chelsea bombing or any of the bombs in New Jersey, a jihadist-linked news agency, Amaq, claimed that an IS “soldier” carried out the Minnesota stabbings.

A 22-year-old Somali-American injured nine people in a shopping mall in St Cloud on Saturday before being shot dead by an off-duty police officer.

Democratic presidential nominee Hillary Clinton, whose lead over Donald Trump in the polls has dipped, said Monday that the United States needed to invest “more time and more resources” in confronting the lone-wolf threat.

“The recruitment and radicalization that goes on online has to be much more vigorously intercepted and prevented. I have been saying this for quite some time,” she said in White Plains, New York.

Her Republican opponent predicted that there could be more attacks, slamming what he called America’s “weak” policies in opening the doors to “tens of thousands” of foreign immigrants.

“We’re going to have to be very tough,” he told Fox. “I think this is something that maybe… will happen perhaps more and more all over the country,” he said.