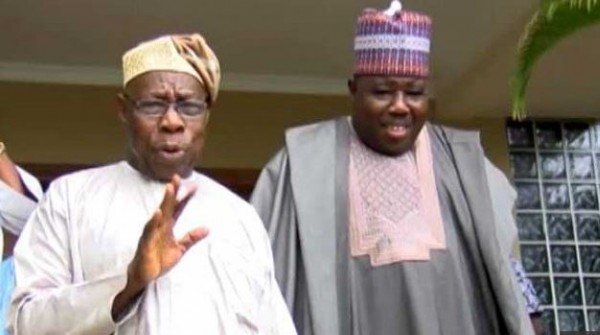 Former President Olusegun Obasanjo has likened the Peoples Democratic Party, PDP, to a “dying baby” that needs to be admitted in intensive care.

He made this position known while addressing journalists with a factional National Chairman of the PDP, Senator Ali Modu Sheriff.

the former president at his residence in Abeokuta, Ogun State where they held a meeting that centered on the PDP leadership crisis behind closed doors.

As they emerged from the meeting, Chief Obasanjo told reporters that the PDP under his leadership was vibrant but the same cannot be said of the party today.

Absolving Sheriff, a former Borno State Governor of blame in the crisis currently bedeviling the opposition party, the elder statesman stated: “I have said to my brother (Sheriff), that I wish him well on the dying baby they have put on his laps, because PDP is in comatose and he was of course not in the PDP, he was never in the PDP until now.

“When I was in PDP, I tried and encouraged him to come and join PDP, but he did not come. But the PDP they have given him now is a dying PDP; a dying baby, it needs to be in intensive care; otherwise, he will just be an undertaker.

“But like I said, it is the responsibility of all Nigerians of goodwill and all friends of Nigeria that wish this country well that we should ensure that the institutions that will underpin a virile, dynamic, thriving democracy are put in place”.

Mr. Obasanjo, who renounced his membership of the PDP – the party on whose platform he was elected president for two terms – in the run-up to the 2015 general elections, however, made a case for a vibrant political party in government and an equally strong political party in opposition for the nation’s democracy to thrive.

The former president reiterated that he remains non-committed to any party as he has quit partisan politics for good.

“Let me make it absolutely clear once and again, I have renounced partisan politics, I don’t belong to any political party, not to talk of his own faction of PDP or any other faction of PDP? But he came and I am very happy to receive him and I said ‘look, for my own education, for my own knowledge, tell me what exactly is happening’, and he briefed me”, Chief Obasanjo added.

Sheriff also spoke to the reporters.

He said: “Baba (Obasanjo) has spoken everything. Baba said the PDP given to me is a dying PDP. He built the PDP that everybody cherished.

“Baba, whether in politics or outside politics, he has a role to play in Nigeria and everyone of us that is looking up to him, if we have a problem, we must come to him for solution.

“Therefore, since we are looking for a solution, whether he is inside, he has said he’s not going to play any partisan politics, we agree but he is our father; father of the Nigerian nation and the grandfather of PDP.

“Therefore, the soul that has gone, he has to bring it back to us and through his advice, we will get through.

“You know, Baba is very correct: so many things have gone wrong and it will be alright Insha Allah. Baba has said it already: Nigeria needs a strong party in government and outside government.

“And he also said that both are needed for democracy to survive. He keeps saying this as a two time President. Every wisdom that we want to lead our party, he has it and that is why we came to consult him”.

The embattled factional chairman said he told Obasanjo at the meeting to return to the party and help in bringing it back to life.