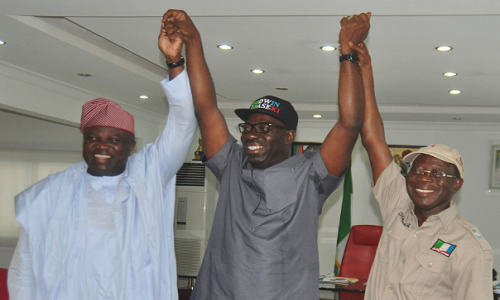 Governor Akinwunmi Ambode of Lagos State has said the giant strides and economic growth recorded in Lagos in the last 16 years could be replicated in Edo State if the people vote for continuity.

Ambode, who is the Chairman, National Campaign Council for the governorship candidate of the All Progressives Congress (APC) for the September 10 poll in Edo, spoke at the party’s grand finale campaign rally in Benin, the state capital, on Tuesday.

According to Ambode, the party’s governorship candidate, Mr. Godwin Obaseki, was a trustworthy, reliable and God fearing person, who would bring his wealth of experience as a financial expert to bear in the governance of Edo.

He said Edo, with its vantage position, as well as its human and natural resources, has the potential to be greater.

“We are happy for the presence of President Muhammadu Buhari in our midst and it is a pointer to the importance of Edo State to Nigeria’s economic development.

“Edo State has witnessed tremendous progress under Oshiomhole this last seven years, and more than it achieved in the last 10 years of the previous government.

“Oshiomhole has laid the foundation for the progress of the state.

“Edo can be like Lagos State, it has all the potential to be great, and we need Godwin Obaseki to make it greater”, he said.