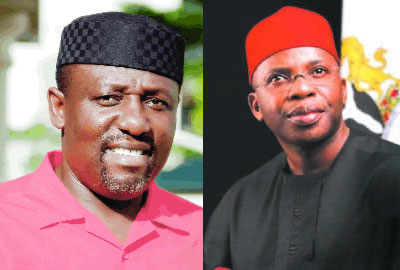 The Imo State Government and immediate past Governor of the State, Chief Ikedi Ohakim, have engaged each other in a war of words over the ongoing demolition exercise embarked by the Rochas Okorocha administration.

While Ohakim, alleged that the original master plan laid down has been destroyed by the present government and that the ongoing demolition exercise was not captured in the state budget, Governor Okorocha described the former governor as one of those politicians in the state, who do not see anything good about his administration.

Okorocha also said that his government was elected to correct the maladministration of Ohakim’s four years in office, which he pointed out, led to the ex-governor’s defeat at the polls in 2011.

In a letter he personally signed and addressed to the Imo State government, titled “Current Trends of Events in Our State”, Mr. Ohakim said, Your Excellency, your present road expansion in Owerri Municipal is not in conformity with the master plan and any known element of road design. For example, the huge economic losses from the present exercise will far outweigh the few meters to be from the proposed expansion”.

“To worsen matters, no public right of way is left for the replacement of pipes and cables, as your proposed expansion will end at the foundation of peoples’ houses. I have it on a good authority that the ongoing exercise were captured in any of the state budget in the last five years. This, therefore makes it fiscally wrong to embark on such projects because it negates the essence of good governance”.

In his response, Gov. Okorocha, through the State Commissioner of Information, Hon. Vitalis Ajumbe, said, “this government as a very responsible and people – oriented government has restrained itself from demolition of buildings that contravened the stipulated distance of about 15 meters from the road; rather what we did was to remove fences and other structures built within 10 metres from the affected roads as well as those that blocked water ways. After all construction is not completed yet. We are getting there and this government appeals to Imo people to remain patient”.

Mr. Ajumbe added that “It is a well-known fact that the Rescue Mission Government came into power when Imolites were fed up with the maladministration and the repugnant abuse of the sensibilities of Imo people by Chief Ikedi Ohakim. The outcry and clamour for change was the major reason the Rescue Mission Government came into power to restore hope to the hopeless and offer to Ndi Imo the leadership of trust they had yearned for”.