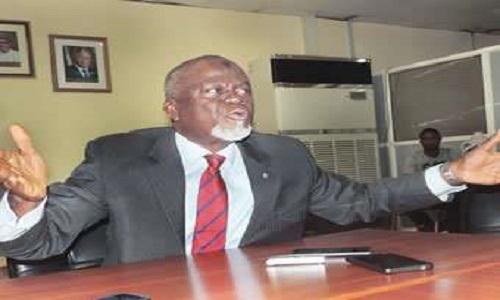 One of the governorship aspirants of the All Progressives Congress (APC) in Ondo State, Chief Jamiu Afolabi Ekungba, has debunked reports, especially in the social media that he referred to the people of the state as “bastards and ingrates”.

According to the reports, Ekungba rained invectives on people of the state following his loss at the now controversial primary election, which was won by Rotimi Akeredolu (SAN).

The aspirant, a traditional chief of Owo, where Akeredolu hails from, was said to have expressed regrets that he wasted over N300 million on delegates, who despite the huge inducements, refused to cast their votes for him in the hard-fought primaries.

In his reaction to the reports on Saturday, Chief Ekungba said: “I never gave any money what-so-ever to any of the 2,834 delegates. If I did not part with money, why will I complain?

“I do not have N300 million to share; even if I had, both in all my interviews and at campaigns to the delegates, I made it very clear that I will not induce anybody with money to vote for me. Why will I bribe people to give me a job that will require so much energy to bring back to life, an economy that is almost dead totally?

“I hope you are aware that Ondo, an oil-producing state, despite collecting about N628 billion federal allocation in seven years of the Mimiko administration, is owing the civil servants eight months salaries. I am an accomplished accountant, an experienced banker and administrator and a financial expert.

“I know the state of Ondo economy and what it will take to fix it. I will therefore, because of the challenges that will accompany the fixing, not bribe my way to offer my people this type of very difficult service.

“The mischievous write up claimed I stormed out of the venue. The video clips of the primary will show that I was the first to congratulate the winner and was the last with him in the arena.

“I was with him throughout the final announcement, shaking hands with the officials, during his acceptance speech and during his brief press interview. So doing all these, how can my coming out be storming out?”