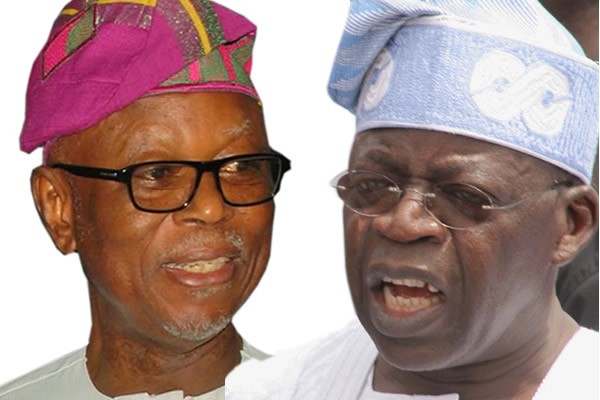 An aspirant in the governorship primary of the All Progressives Congress, APC, in Ondo State, Dr. Tunji Abayomi, has tackled a chieftain of the party, Asiwaju Bola Tinubu, for calling for the resignation of the party’s National Chairman, Chief John Oyegun, over the outcome of the primary election.

Mr. Tinubu had in a recent letter to Oyegun, demanded his resignation for purportedly allowing himself to be used to manipulate the governorship primary, which was won by Rotimi Akeredolu (SAN).

In response, the APC chair said he would not join issues with Tinubu, who he described as a highly respected leader of the governing party.

He, however, denied the former Lagos governor’s accusations, saying if the need arises, he would respond to them at the right time.

Joining the fray, Abayomi, who stirred the hornets’ nest prior to the September 3 governorship primary of the party in Ondo State with his open letter, in which he accused the APC leader of planning to impose another aspirant – Segun Abraham – as the flag bearer, faulted Tinubu’s call on Oyegun to resign.

According to him, “Tinubu was wrong to have asked the national chairman to resign because the National Working Committee, NWC, of the party upheld the result of the primary of the party held on September 3, 2016 in Akure.

“For calling for the resignation of the chairman, I think Asiwaju Bola Tinubu is very wrong because he is not a member of the NWC and he cannot speak for the NWC. He did not participate in the entire process and whatever information he has must have been given to him by his agents. We heard it that there was no vote casting among the NWC members before they took the decision over the matter contrary to his allegation in his letter to the chairman, and also the position of the party was that there was no vote casting, I expect Asiwaju as a leader of the party to give credit to the vital opinions on the primary”.

“I am personally disappointed that Asiwaju would be determined in his action, that a primary that he promised would be free from undue influence, should be voided by all means, I think he was wrong”, he added.

The aspirant also declared that “with or without Tinubu’s support, the party would still win the forthcoming governorship election in the state it is the people of the state that would decide the election”.

“What is important is the support of the people of Ondo State, though we want his (Tinubu) support for Akeredolu for the election but we cannot force him, if he refuses to support us that cannot stop us from moving on. We still have the respect for him but we cannot force him to do right, we can only appeal to him to do right but the choice to do or not to do is entirely his prerogative”, Abayomi stated.