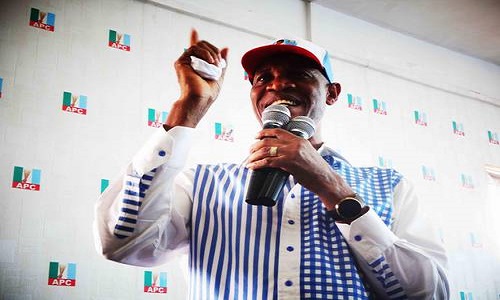 One of the leading aspirants in the last Saturday’s governorship primary election of the All Progressives Congress, APC, in Ondo State, Olusola Oke, has alleged irregularities in the process.

Mr. Oke said the governorship primary, which returned a former National President of the Nigerian Bar Association, Rotimi Akeredolu (SAN) as winner, was marred by irregularities.

According to him, over 500 illegal delegates were included in the list of delegates, while authentic voters were denied the opportunity to vote.

Speaking through his Director of Campaign, Bola Fisayo, in Akure, the state capital on Sunday, Mr. Oke said the illegal delegates were not constitutionally elected as delegates of the party.

“The illegal delegates voted because the organizers introduced a delegates manifest with which tags were issued and which admitted the delegates into the centre”, said Mr. Oke, the candidate of the Peoples Democratic Party, PDP, in the 2012 governorship election in the state.

The aspirant insisted that the list of delegates used deferred from the authentic list, pointing out that some delegates were deliberately omitted and replaced with those who were not elected as officials of the party.

Mr. Oke, who had an impressive outing by scoring 576 votes to come third behind Olusegun Abraham despite joining the APC in March, 2015, also alleged that the “illegal” voters were used to rig the election after they were given multiple ballot papers to vote for a particular candidate.

“We have made representations to the appeals committee already, hoping that it would look into the process”, he said.

Mr. Oke was reluctant to congratulate Mr. Akeredolu after the latter was declared winner in the early hours of Sunday, saying he would review the exercise and come out with a position.

He also said those insinuating that he would leave the party if he failed to win the primary, were only expressing their personal opinions.

In a swift reaction, the Ondo APC spokesman, Omo’oba Adesanya, said the primary was transparent and devoid of any form of malpractices.

He also countered the argument that the list of delegates used was not the authentic one.

According to the party spokesman, the list earlier available to aspirants was not authentic because it did not have the names of some elected officials who should be there.

“For example, the name of the Woman Leader, South, who has been in that position for the past two years was not in that list of delegates”, Mr. Adesanya said.

“These issues were raised and the Appeals Committee made a recommendation, but congress could not implement that list before the 2015 election and so the faulted list continued to be in use.

“Now that the national body got interested, Kekemeke (state party chairman) had no choice but to submit the authentic list which was used by the organising committee of the primary”.