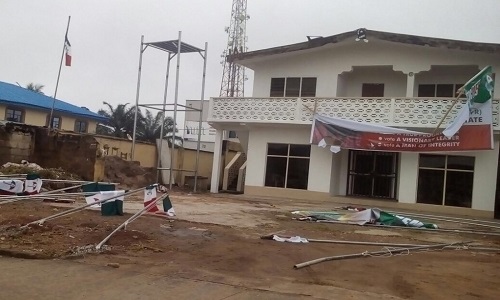 Unidentified persons suspected to be political thugs on Saturday night invaded the campaign office of the governorship candidate of the Ali Modu Sheriff-led faction of the Peoples Democratic Party (PDP) in Ondo State, Jimoh Ibrahim.

The 18 flags at the campaign office, situated along Oyemekun Road, Akure, were also torn into shreds.

A giant banner bearing the candidate’s photo was pulled down by the thugs, who left behind pieces of banners and the party flags littered and strewn around the premises, which is a story-building.

Confirming the attack, the Director of Publicity, Jimoh Ibrahim Campaign, Sola Akinuli, described it as unfortunate.

“It was much unexpected from any quarter that such a barbaric act should rear its head in 2016 when we thought all acts of hooliganism have been thrown into dustbin”, he said.

“We are, therefore, calling on security agencies to take over the matter in order to forestall future occurrences.

“On peace we stand and that we plead from all quarters”, Akinuli said.