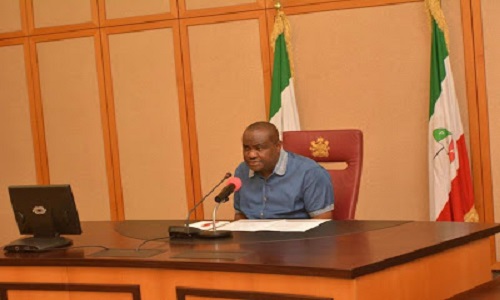 The governor was reacting to allegations by Mr. Oshoomhole that him (Wike) and his Delta State counterpart, Senator Ifeanyi Okowa, mobilized 8,000 militants to Edo State, to unleash mayhem during the September 28 governorship election.

Wike, who denied the allegation as false, said the Edo governor was jittery over the rejection of the All Progressives Congress, APC, and its candidate, Godwin Obaseki, by voters in the state.

He also denied the allegation by Gov. Oshiomhole that him and Okowa sent N2billion to the governorship candidate of Peoples Democratic Party, PDP, in Edo, Pastor Osagie Ize-Iyamu.

Speaking when the Inter-Party Advisory Council (IPAC) in Rivers State paid him a solidarity call at the Government House, Port Harcourt on Wednesday, Governor Wike expressed shock that at his age, Oshiomhole still believes in drama and lies.

The IPAC delegation included representatives of all registered political parties except the All Progressives Congress, APC.

Mr. Wike said that he was shocked by Oshiomhole’s allegation because on the day of the campaign, he met with the outgoing governor alongside other APC Governors at the Airport in Benin City, where they all embraced.

“Oshiomhole even cornered me and said ‘don’t mind these people, they don’t know that we meet and talk”, the Rivers governor said.

“If Oshiomhole has lost the confidence of his people, he should not blame me. He brought the President and 10 APC Governors and he was not satisfied. Only because two PDP governors visited

“Oshiomhole at his age should stop dramatising and telling lies. What will his children say when they see him behave like that?” Wike queried.

“Oshiomhole doesn’t know when to stop lying. Why do you think that you will continue to deceive the people? This was the same man who praised former President Goodluck Jonathan for promoting free and fair election, one man, one vote which saw Oshiomhole win a second term. Today in his notorious inconsistency, anywhere Oshiomhole goes, he insults the former President. When President Buhari leaves office, Oshiomole will do the same to him”, the governor added.

He further said that: “What I told Edo people that has set Oshiomhole in panic mode is that they should not trust INEC or the security agencies because they will never be neutral. I still repeat that the Edo people must remain vigilant so that they their votes will count”.

He charged Nigerians to disregard Oshiomhole’s lies as he is no longer pro-people, saying “The Comrade in Oshiomhole has died long ago. There is no Comrade in him. From Khaki, he is now wearing costly imported Safari Suits”.